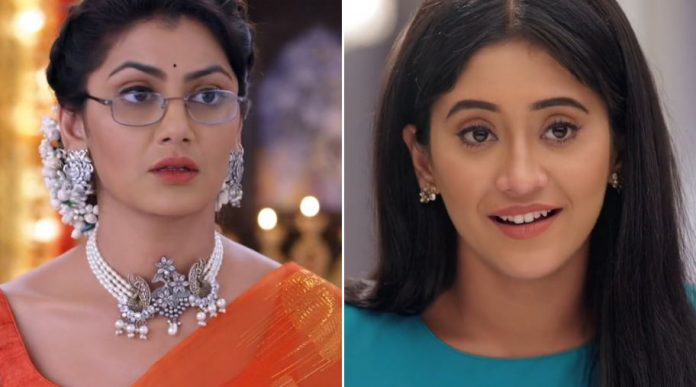 Kumkum Bhagya Rishta Kehlata Spoilers Upcoming Rhea and Priyanka are happy that Sanju has agreed for their plan. Purab and Disha have sweet moments, while they celebrate Diwali like before. Disha gets affected by his presence. Purab too gets falling for her again, since she has always been his only love. Destiny brings them together. Purab confronts her about her lie regarding Ritik. He has learnt that she isn’t into any relationship. He gets hindered because of Aaliya.

He tells her that he isn’t completely right or wrong. He wants to spend time with Disha. Aaliya suspects that he has gone to meet Disha. She vents anger on Prachi. Priyanka wants her revenge on Shahana. Priyanka thinks Prachi will get defamed and then her family will cry. Rhea works out her evil plan with Sanju’s help. Prachi believes Sanju and takes the risk of drinking the spiked juice. Sanju feels worried, since he wasn’t willing to obey Rhea. Pragya feels restless about Prachi. Priyanka wants Prachi to fall in Abhi’s sight. Will Ranbir come to rescue Prachi on time? Keep reading.

Yeh Rishta Kya Kehlata Hai: Kairav makes a shocking demand to get a new dad instead Kartik. He doesn’t like Kartik at all. Kartik decides to take a new avatar to win Kairav’s heart. He wants to convince Kairav that he loves him and respects Naira as well. Kartik fulfills Kairav’s wish. Kartik comes packaged in a big parcel and surprises Kairav. He takes a Sardar disguise. Naira wants Kartik to keep patience and not do anything that Kairav takes things in a wrong way. She doesn’t like Kartik’s drama.

She feels Kairav will strongly react when he learns Kartik was just fooling him. Kairav enjoys his new cool dad. He wants him at home. He thanks Naira for ordering such a cool dad online. He dances with Kartik. Kartik finds Kairav happy after such a long time. He can do anything for his smile. Kairav will soon learn that Kartik has taken the disguise to prove his reality.

Muskaan:
Muskaan prays at the temple for her daughter. Ronak’s wife Nisha comes to the same temple to pray. Muskaan applies sindoor and wishes to meet Ronak. Nisha drops her sindoor by mistake. Nisha takes care of Khushi. She plans Khushi’s birthday. Bunty’s wife and her mum want to trap Khushi. Police still searches for Muskaan. Ronak is upset and misses Muskaan. Hanumant tells him that preparations are done for Muskaan’s soul peace puja.

Ronak feels she is alive and would come anytime. Muskaan arrives home and learns that Ronak doesn’t stay there. She learns that its Bau ji’s house. She doesn’t know that Sir ji is alive. Sir ji learns that someone was asking for Ronak. He doubts its Muskaan. He rushes to see her, but she disappears. Inspector finds Muskaan and follows her. Roshni meets Muskaan and helps her out by lying to the police about her.