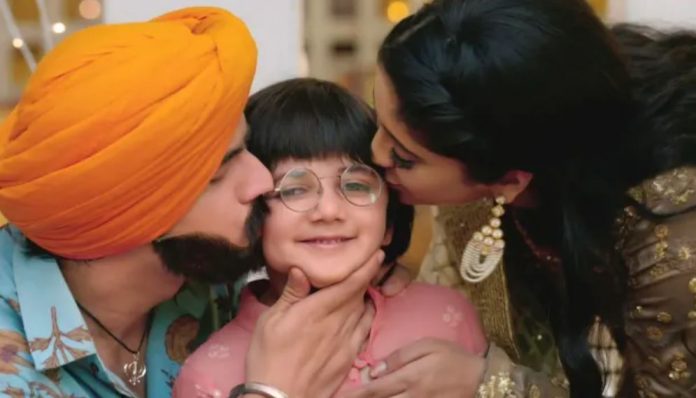 Star Plus 2 Hits YRKKH Kahaan Hum Spoilers Kartik, Naira and Kairav make sweet wishes for each other’s happiness. Kairav wishes that they get friendly. He wants to click their picture. Naira asks Kartik not to give false hopes to Kairav, his drama may put them in more trouble. Kartik wants to not complicate their lives. Naira gets worried when his fake beard pops out by a touch. She finds Kairav reaching close. She gets speechless. Kartik tells her that he is getting Kairav’s love by being Jolly. She tries to cover up the truth by hugging Kartik. Kairav is happy to see them becoming friends.

Kartik learns that Kairav is behind. He fixes his fake beard soon. Kairav asks them to make a sweet video to keep a memory. He likes Jolly Singh. Kartik gets hurt. Kairav will soon learn that Kartik is playing Jolly’s drama. How will Kairav react on this? Keep reading.

Kahaan Hum Kahaan Tum:
Mahesh works as a lightman at Sonakshi’s sets. He reaches the power room to short circuit and ignite fire in Sonakshi’s house. Sonakshi gets ready for her marriage. Suman and others welcome Sippys who come with Rohit’s baraat. Sonakshi gets a huge shock when she finds the fire catching up from the wires. Sonakshi shouts for help. She tries to reach Suman and Pulkit. Sonakshi wants to get saved. She struggles to escape from the fire.

She faints down because of the smoke. Mahesh reaches Sonakshi to rescue her. He lifts her to take her out of the house. He becomes a hero in front of the media and family members. Pulkit helps Mahesh in putting off the fire. Mahesh tries to show that Rohit isn’t capable and deserving of Sonakshi.

Muskaan:
Roshni praises Ronak for his bravery. She tells him that she has his wallet. He thinks she is very smart. She rushes back to Muskaan. Hanumant realizes Nisha’s mistake. Nisha gets the photo frame repaired. Muskaan tries to find Ronak. Roshni takes Muskaan with her. She wants to know her Muskaan’s life story. Muskaan misses to see Hanuman, despite being close. Ronak gets many dresses for Khushi. She wants him to look the best.

Khushi gets the dress which Nisha bought for him. She loves Nisha a lot. Ronak cares for Nisha. Nisha knows that Ronak didn’t forget Muskaan until now. Roshni protects Muskaan. She tells that she lives alone and doesn’t have her parents with her. Muskaan takes care of little Roshni. Ronak takes care of Khushi, who gets scared at night. Nisha helps Ronak in pacifying Khushi. He is thankful to Nisha.