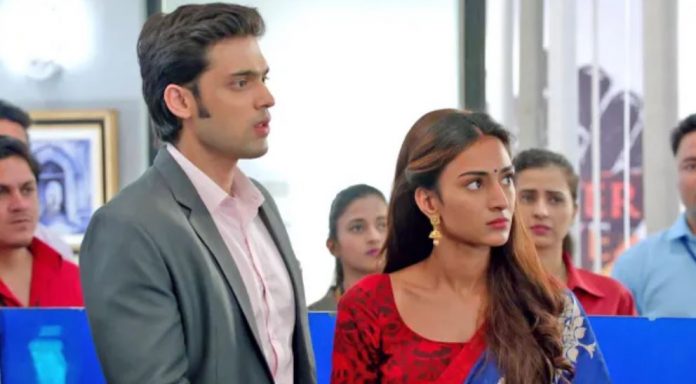 Kassauti Zindagii StarPlus Prerna arrested Anurag struggles Komolika employs Ashish for her evil plan against Prerna. She bribes him by doubling his salary. Ashish gets much willing to do anything for money. He accepts her offer. She asks him to make a strong plan against Prerna to throw her out of the office. Ashish tells her that Prerna is already resigning and their plan won’t be needed in this case. Komolika still wants Prerna to face humiliation. She just wants Prerna to get away from Anurag. For her motives, she wants Anurag to hate Prerna.

She knows that Anurag hasn’t regained his memories yet. Being unaware of Prerna, he may not trust her if she gets blamed for a crime. She wants to test her fate again by putting Anurag and Prerna in trouble. Komolika asks Ashish to make Prerna fall in Anurag’s sight. Ashish makes a plan to accuse Prerna for stealing company’s confidential documents, for which Anurag won’t be forgiving her. Komolika likes the plan. Ashish works out his plan without letting Anurag doubt. He first accuses his own secretary Surbhi and then Anurag’s secretary Prerna.

Unexpectedly, Inspector finds the document with Prerna’s belongings. He arrests Prerna for the fraud. Anurag gets raging and fires Ashish for blaming Prerna. Ashish worriedly calls Komolika to tell about losing his job. She assures to pay him money as promised. She doesn’t want him to name her in the scandal. Prerna asks Anurag to keep her arrest news a secret from her family. Anurag assures to bail her out and prove her innocence the same day.

He doesn’t want Prerna to fall into trouble. He doesn’t remember her, but feels like he knows her well. He is sure that she can never do anything wrong. Komolika gets pleased watching Prerna’s arrest. When she goes home, Mohini surprises her with a gift. Komolika gets bored by Mohini’s lecture. Mohini wants Komolika to participate in Sindoor Khela ritual well. Komolika shows fake enthusiasm. She hopes to get Anurag soon. Mohini finds her an ideal bahu. She feels lucky to get her.

On the contrary, Anurag struggles to find any evidence supporting Prerna so that he can head to the police station and free her from false accusations. He speaks to his staff and learns that Ashish was threatening to fire Prerna. He realizes Ashish didn’t like Prerna and played this game to frame her. Anurag wants some lead. He confronts Ashish. Ashish lies that he was suspecting Prerna. Anurag loses his cool when Ashish speaks against Prerna. He wants to check the CCTV footage to find the truth. He finds Ashish in disguise keeping the document with Prerna’s belongings.

He gets the footage to prove Prerna’s innocence. Ashish doesn’t want to get caught. He thinks to reveal Komolika’s name to save himself if he gets caught by the police. He doesn’t want to go to jail. Anurag heads to police station and passes the footage to help Prerna. He tells the inspector that he has got the non-edited footage. He wants to know who is framing Prerna. Komolika gets mad in her hopes to get Anurag. Anurag gets Prerna released. He takes her home and introduces her as his secretary. They unknowingly participate in Sindoor khela rituals, much to Komolika’s shock.