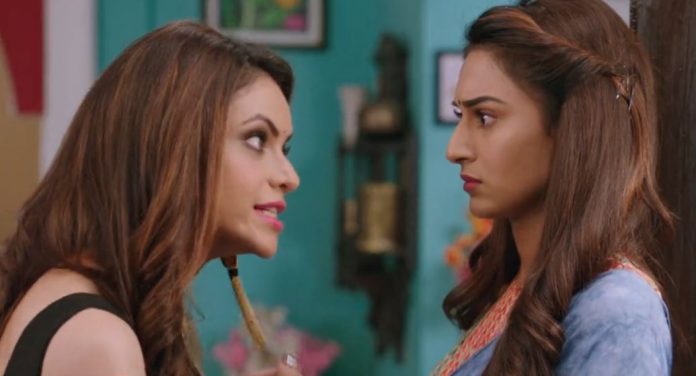 Kasautii StarPlus Komolika Prerna truth revealed Mohini speaks to Anurag about his honeymoon trip with Sonalika. She wants Anurag to know his wife well. She wants them to develop of understanding. Anurag tells Mohini that he had invested in a new company recently, its his business and he has to focus on it. He asks her not to bother him with such plans. He hopes Sonalika understands him. Komolika asks Mohini what did Anurag answer. Mohini feels bad to tell her that Anurag refused to go on the honeymoon. She assures that she will get her room nicely decorated to compensate for Anurag’s refusal. When they come across Prerna, they ask Prerna to decorate the room for Anurag and Sonalika’s first night.

Prerna outright refuses to them. She gets upset. Sonalika makes a sad face. Mohini compels Prerna to fulfill her Bahu’s wish. She asks Prerna what will she tell Anurag if he asks the reason for refusing to them, does she want him to get unwell after recalling the past again. She asks Prerna is this her love for Anurag. Prerna agrees to decorate the room. Komolika orders her to make good arrangements. Anurag and Prerna have a cute moment when she goes to decorate the room. Anurag finds her shy. He gets attracted to her.

He asks her what is she doing. She tells her that she is decorating his room on his mum’s saying. He wants to know about her husband. She tells him that her husband is very loving and caring, he is helpless to stay away from her. She tells that she is sure that her husband will take care of her baby when he gets rid of his problems. He greets her baby in womb and asks her to be strong like Prerna. She gets emotional. She recalls the moment when she broke the pregnancy news to her. Prerna decorates the room. Anurag feels bad that she is pregnant and doing hard work. He gets angry on Komolika for making a pregnant lady work this way.

Komolika puts the blame on Mohini. She tells him that Mohini gave this order to Prerna, she has nothing to do in this. Anurag himself goes to help Prerna. They both get into another romantic moment. Komolika bursts her anger bubble at Prerna. Anurag clarifies that the moment was sudden for them. He doesn’t want Sonalika to think anything wrong. Komolika wants to get Anurag’s love. She also tries to kill Anurag and Prerna’s unborn child. Her plan doesn’t work, and instead brings the couple closer. Komolika doesn’t care for anything.

She gets inhumane to make Prerna work a lot. Later, Komolika tries to woo Anurag. They get disturbed by a faulty wire spark. Anurag gets relieved that he is able to avoid Sonalika. Komolika loses her cool. She gets angry on Prerna for her intentional mistake. She scolds Prerna for ruining her first night. Her behavior gets similar to that of Komolika’s old avatar. This makes Prerna suspect that Sonalika is Komolika in reality. What will Prerna do now to certain her doubt about Sonalika. Keep reading for Kasautii StarPlus Komolika Prerna Anurag love triangle.