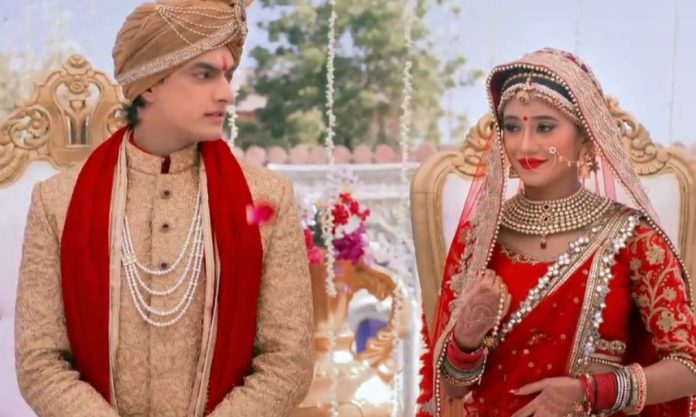 Yeh Rishta Latest Mujhse Shaadi Karoge Moment Kartik realizes that Naira isn’t at home when he goes to Singhania mansion to meet him. He leaves his car and runs away to meet Naira. Naksh finds him really strange to leave the car and run. Naira feels awkward. She tells Goenkas that she will meet Kartik. She also runs away. Goenkas ask her to take the car, how long will she run. Naira doesn’t listen. Goenka secretly follow Naira. Singhanias also come there. They hide behind the roadside stalls to witness the cute moment of Kaira union. Kartik and Naira finally confess love and also propose each other for the marriage.

They ask each other ‘’Mujhse Shaadi Karoge’’ and instant say Haan/yes. They start fighting cutely. He tells her that he went to meet her at her house, she doesn’t listen and just fight. She tells him that he shouldn’t blame her, he should have called her before coming. She blames him for always fighting. He tells that he doesn’t want to talk if she only fights. She shouts on him to make him shut up. They have a dreamy romance coming true. Their confession gets something beyond reality. They accept each other’s companionship for lifetime.

RadhaKrishnan: Krishna kills his uncle Kans to bring an end to his evil. There is a huge action fight between good and evil. Kans knew that Krishna will become a medium of his death. He wanted to kill Krishna. He calls Krishna to his palace to torture him. Krishna finds his her real parents captive there. Devki commands him to kill Kans. Krishna obeys her command. He drags Kans for the battle. After the long fight, Krishna kills Kans. He frees his parents from Kans’ captivity. He also gets the people saved from Kans’ tortures.