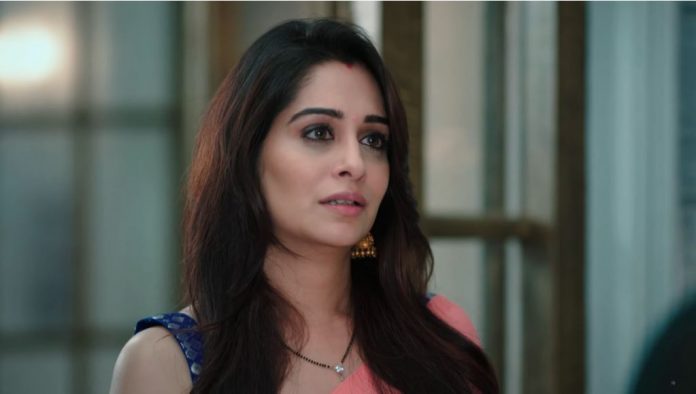 Kahan Hum Sonakshi questions Pooja Real parents Nishi fumes on Veena and others for always supporting Sonakshi. She questions Veena’s decision to get a low class actress home as Sippys’ bahu. She tells that Sonakshi became more important for Pooja than all of them, who loved Pooja since many years. She feels Sonakshi has manipulated Pooja to weaken their relations. She tells that she will not let Pooja stay with Sonakshi at any cost. Rohit defends his wife when Nishi insults her. He doesn’t want anyone to speak ill about Sonakshi without knowing the real cause of Pooja’s news leak. He is helpless as he can’t name Pari. He doesn’t want to put Sonakshi in more trouble.

He wishes that his family understands Sonakshi’s efforts and genuine concern for Pooja. Naren and Veena don’t say anything, since they are thankful to Sonakshi for saving Pooja’s matter from media. Rohit reminds Nishi that Sonakshi had risked her career and fame for saving Pooja’s dignity. He asks the family to trust him that his wife is innocent. Nisha wants an answer from him. She wants to know who is behind the cheap publicity conspiracy. Sonakshi brings Pooja home. She also faces Nishi’s wrath. Rohit avoids their questions. Pooja isolates herself from the family. She doesn’t want the favor of anyone.

She wants just Sonakshi with her. Yash and Nishi get saddened. They think Pooja needs time. Sonakshi understands that Rohit is hiding something. Rohit stays disturbed because of Pari’s truth. Sonakshi confronts him to get the truth out. Rohit doesn’t change his mind. He wants Sonakshi to just focus on Pooja. He doesn’t tell the truth. Sonakshi doesn’t deter and keeps on asking. This makes her face his anger. He tells her that he isn’t getting any peace in his room because of her. He goes away, which worries her. She knows he is disturbed. She doesn’t bother him. She is much hurt by his words.

Rohit goes to sleep in his hospital cabin. He misses Sonakshi and their good times. Sonakshi too stays upset and sheds tears. She misses him. Sonakshi gets busy in looking after Pooja. Veena worries that Rohit didn’t come home at night. She learns that Sonakshi is looking after Pooja well. Sonakshi summons Rohit home. Nishi gets accusing Sonakshi once again. She feels Sonakshi has snatched her daughter. She is much hurt in her heart. Sonakshi realizes her pain. Nishi blames Sonakshi to stoop low for the sake of publicity. Sonakshi doesn’t accept the insult. She explains that she is already a successful writer and need not stoop low for publicity.

She wants Nishi to trust her and make their bonding better, at least for Pooja’s sake. She answers Nishi with a hope to clear her mind. She doesn’t want to tolerate the insult and punishment when she isn’t wrong. She wants Pooja to overcome the odd truth and move on. She tries to convince Nishi. Pooja gets finding her real parents. She wants Yash and Nishi to tell her about her real father. They get speechless. Sonakshi realizes that Rohit knows about Pooja’s real parents and hiding the truth for a big motive. She wants to know about Rohit’s big secret. Rohit tells her that he will never want Pooja to find her real parents’ truth. Will Rohit confide this time? Keep reading.