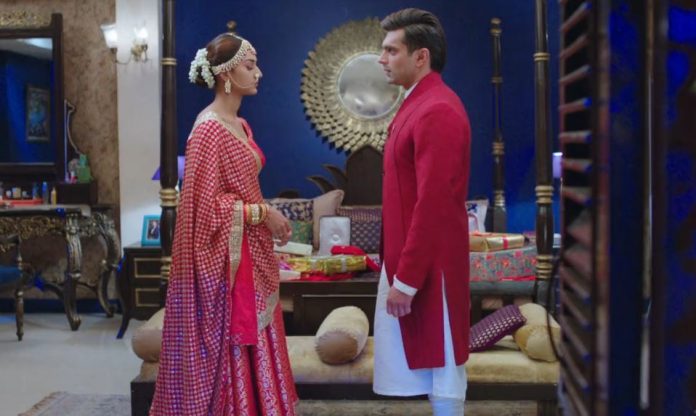 Kasautii Bajaj awaited entry Anurag Prerna tale drags Mohini doesn’t spare Prerna and Veena. She just wants to insult them for being low class and targeting rich people. Prerna answers Mohini well and claims her rights on her love Anurag. The arguments get bigger. Komolika informs them about the big theft. She doesn’t take time and just accuses Prerna for having the cupboard keys. Mohini also blames Prerna and makes sure that Prerna doesn’t run away. She asks if Veena is also involved. Veena wants to keep her esteem and leave. Prerna asks Mohini not to do anything that she regrets later. When Anupam thinks to help Prerna, he gets insulted by Nivedita. He gets helpless.

Shivani calls Anurag for help. This makes Anurag learn about the blame on Prerna. He understands its serious and rushes out of Prerna’s house by leaving the photos. He fails to see Prerna and her pictures. He speaks to Mohini to stop her from insulting Prerna this way, when she is pregnant. Mohini doesn’t listen to him. She realizes that Shivani has told everything to Anurag. Nivedita reprimands Shivani. Komolika reprimands Veena the same way like before. Veena observes Sonalika, who is behaving exactly like Komolika. Anurag rushes to home and falls in trouble. He hits a car by mistake. He gets blocked by the car owner.

The man drags him to the police. Anurag’s actions get recorded by some unknown person. Komolika tells Prerna that her mum would have helped her. Prerna gets enraged when Veena gets troubled. Mohini and Komolika target Prerna and call the police to get her arrested. Prerna plots against Komolika to get the house searched so that Komolika’s truth comes out. Prerna gets rescued by Anurag. Anurag defends her against his mum and wife’s claims. Anurag gets close to know about his relation with Prerna. Will Komolika let this happen? Will her plan backfire and she gets caught? Keep reading.