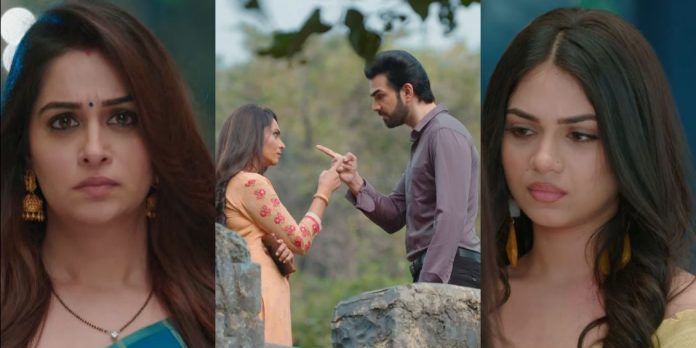 Kahaan Hum Huge twists Shockers Stunners coming Yash tells Rohit that Rani isn’t a good person and she is brainwashing Pooja a lot. He is afraid that he will lose Pooja when the truth comes out. He realizes the mistake done by Nishi and him to bring Rani home. Rohit also feels the same. He tells Yash that he had already warned Nishi. He tells that Rani is very greedy and there is no end to it. Yash tells that they should give the money to Rani if they have to keep Pooja with them. Rohit asks Yash to trust him, he can solve the mess. He decides to meet Rani.

On the other hand, Sonakshi gets her payment cheque. She wonders why didn’t Suman receive it like always. She learns that Suman is hesitant, since Sonakshi is married now. She wants to tell Suman that she will always be her daughter first and then Sippys’ bahu. She doesn’t want Suman to alienate her. She calls Suman at her shooting set for a talk. She tries to talk to Netra and reveal her decision that she can’t continue acting. Netra doesn’t accept Sonakshi’s sudden shocking decision which could ruin the show completely with Parvati’s exit. Sumit enquires from Sonakshi if Netra accepted her decision.

Sonakshi tells him that Netra refused and maybe needs time to understand the complexity of the matter. Sumit wishes Sonakshi all the best. He wants her to talk to Rohit once. He is sure that Rohit will never agree with Sonakshi’s quitting decision. Meanwhile, Pooja wants to attend the late night party at her friend’s place. Nishi doesn’t permit her. Rani thinks this is the chance to make points in Pooja’s sight and impress her. She tells Pooja that she will talk to Nishi. She permits Pooja to go and enjoy the party. She tells that she will bear Nishi’s anger and also explain the need of freedom for youngsters.

Pooja gets glad to have her. Rani gets Rohit’s call and is surprised. She was earlier scared of him. She now takes him lightly. He asks her to meet him for a talk. She expects the money coming. She agrees to him. Rohit awaits Rani at the location where Sonakshi has come for the jungle scene. Sonakshi calls him up to tell about her decision. He states he is busy with his patient. Sonakshi fails to tell anything to him. Rohit meets Rani and gets threatened by her. She demands the money. She is sure that Sippys love Pooja more than the money. She asks Rohit what would he tell Pooja and Sonakshi if she (Rani) reveals that she isn’t Pooja’s real mum.

She reminds Pooja’s suicide attempt. Rohit gets angry. He learns that Sonakshi is around the same location for her shoot. He takes Rani away from there. Rani laughs on him seeing him hiding the matter from Sonakshi. Also, Pari calls up Rohan and wants him home when Suman and Pulkit are away. She plans a romantic time with Rohan. Rohan leaves his work and rushes to Pari. Later, Suman meets Sonakshi and asks her the urgency. Sonakshi hands over the cheque. Suman tells her that she has the right on her earnings post marriage.

Sonakshi asks her to then return her house which contains their special memories. Suman and Sonakshi get nostalgic. They have a sweet moments recalling their old memories. Sonakshi asks her to keep the payments. Suman is proud of her. Pari is shocked when Tanya arrives home instead of Rohan. She quickly rushes to inform Rohan about Tanya. Tanya doesn’t let her make any call. She vents anger on Rohan’s girlfriend. She asks Pari to help her in nabbing the culprit. Pari wants to stop Rohan from coming home. Yash tells Rohit that they should pay Rani to conceal the truth. Rohit disagrees.

He thinks to tell the truth to Sonakshi and seek her help in Pooja’s matter. Pari is afraid that her affair will get exposed. Sonakshi gets Rani’s important letter. She doesn’t check it and goes home to give it to Rani. Rohit knows Rani is exploiting their weakness, Pooja. He wants to find Rani’s weakness to take her under control. Sonakshi and Rohit will be learning about Rani’s daughter, who is jailed for theft. Rohit will realize Rani’s weakness is her daughter and use the girl in his plan. Rani panics knowing Sonakshi has the letter sent from the jail. She doesn’t want Sonakshi to learn it.