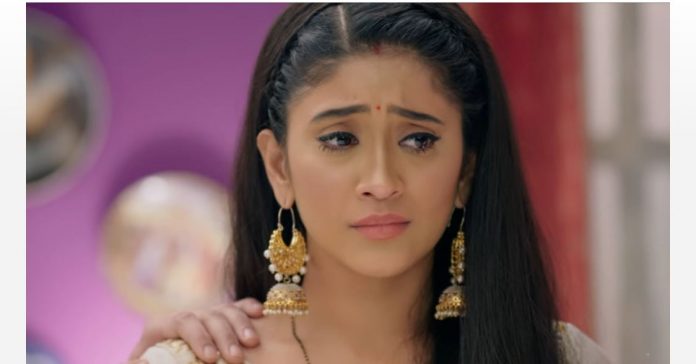 Yeh Rishta Upcoming Naira drastic step Lav Kush caught Kartik and Naira are much worried for Trisha. Kartik is much angry on the police officer for not finding the culprits till now. He wants Trisha to get justice, since it will be a relief for her. Inspector assures him that he will investigate the case well. Manish and Samarth also ask for solving the case soon, since the wrong doers can get away and escape if the justice gets delayed. Lav and Kush get afraid to get caught, since their family is unknowingly getting them caught. They want to leave the house soon. Naira tells Kartik that she felt like Trisha was signing towards Lav and Kush.

She tells that Abhishek maybe involved in Trisha’s accident. Naira shares her doubts. Kartik doesn’t think so. He tells her that she is just overthinking and needs to stop her mind from going other ways. He consoles her. He tells that he will find the truth by his own ways. He assures to get justice for Trisha. Kairav overhears Lav and Kush’s conversation. Kairav finds them removing the packet from the soil. Lav tells Kush that they have to hide the phone somewhere else, since police can reach them on finding the phone if Kairav tells anything to his parents.

Lav and Kush don’t want to get accused by Kairav. They tell that even Abhishek has run away to save his life. Kairav learns about their plan and gets confused, according to his age. Lav and Kush see Kairav, when the little boy comes into sight. Lav scares Kairav about the ghosts, eating our babies and their parents. Kairav gets scared to die by the ghosts’ hands. He feels terrible and runs to Naira. He tells them that he is scared of ghosts. She fails to pacify him. Kairav runs to the washroom and hides himself. Naira tells Kartik about Kairav’s sudden fears.

Kartik tells her that he will end Kairav’s fears. Kartik and Naira put efforts to lighten up Kairav’s mood. Kairav falls asleep. Kartik wants to know the source of the fearful stories. Kairav stays disturbed. He refuses to go to the school. Vansh asks Kairav to accompany, since its their friend’s birthday. Kairav stays scared to step out of the house. The family plans some sports activity to keep his mind engaged. Kairav refuses to go to the lawn, where the ghost resides. On triggering, Kairav tells them about Lav and Kush scaring him. Kartik and Naira get upset with Lav and Kush. Surekha feels bad to see the family reprimanding her sons.

Manish tells that they will find the ghost and bash him up. Kartik and Samarth also like the idea. They ask Kairav to accompany them and watch how they bash up the ghost. Kairav takes them out where he shows the place. They get the place dug out and find some packet and a box, in which Lav secretly hides his wishes. Lav tricks the family cleverly and reminds them the lovely childhood phase. Lav tells that he cares for everyone and wishes for them. Surekha feels proud of them. Lav denies the blame of scaring Kairav. The family believes Lav and Kush. They get emotional on reading the wishes. Lav has hidden Trisha’s phone.

He gets much praised. Kartik finds some way to communicate with Trisha. Kartik and Naira meet Trisha and explain her that she will have to help them in finding the culprit. They use a method of using alphabets to deduce the culprit’s name. Trisha reacts on seeing L alphabet. She gets serious. Kartik informs the doctor and gets help for Trisha. Naira suspects Lav. Nurse asks them not to pressurize Trisha so soon and let her just recover. Naira doesn’t want Lav and Kush to get away so soon. Lav and Kush run away to save themselves. Naira catches them, when they expect their freedom.