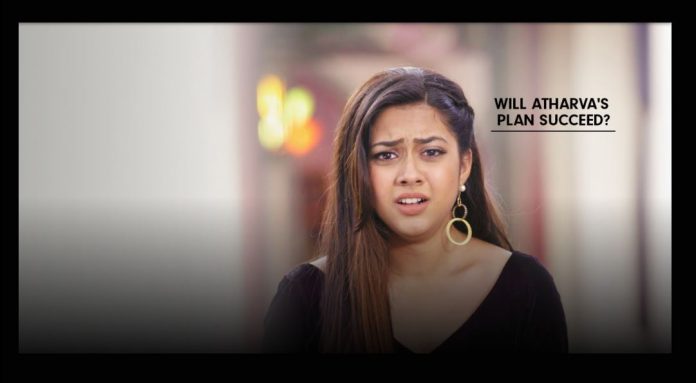 Malhar Kalyani Raabta ruined Atharv glory moment Atharv takes a disguise of a kinner Mastani. She misleads Malhar and tells him that Kalyani is pregnant. Malhar is super shocked and thinks Mastani is lying. Atharv tells Malhar that she isn’t lying, Kalyani is really pregnant. He asks Malhar to ask Kalyani the truth. Kalyani shockingly admits that she is pregnant with Rachit’s child. Kalyani hurts herself while she hurts Malhar’s sentiments. Malhar stops her and hugs her. They break down by the news of her pregnancy. She falls in Atharv’s plan. She doesn’t know that Atharv is ruining her family.

Aao Saheb slaps Kalyani. Malhar supports Kalyani and shares her pain, knowing she just loves him, she would never leave him in life’s tough phase. He also promises to be with her in good and bad times. Malhar wants to find the truth. He understands that there is something more to the truth. Kalyani’s character gets questioned. Malhar takes a stand for Kalyani. He tells that its Rachit’s mistake to force a relation on Kalyani. She gets emotional to see his immense unconditional love. Malhar vents anger on Rachit’t car by shooting bullets and breaking the glasses. Sarthak shares Malhar’s sorrow and consoles him.

Malhar goes to check the records in the hospital to find out if Kalyani is really pregnant. Kalyani gets insulted by Malhar’s family. She is asked to abort the child. Atharv returns home as the child avatar. He acts to support Kalyani. He enjoys her plight. He wants to see what Kalyani does now, since she isn’t pregnant. Atharv faces a moment of glory to see her crying. Malhar demands the doctor to say the truth. He also scolds the doctor for concealing the matter and misleading him. Malhar gets Kalyani’s file. Will he learn the truth or let the misunderstanding break his marriage? Keep reading.