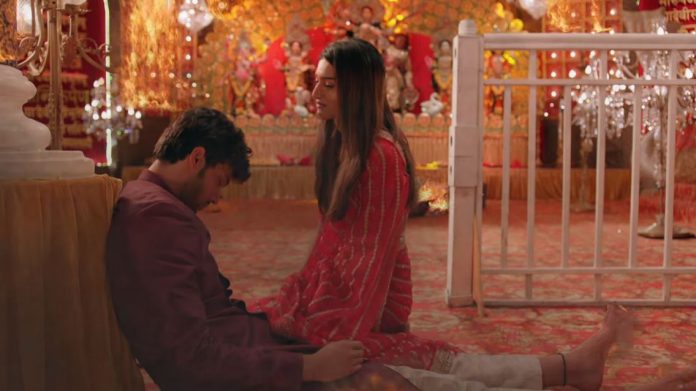 Anurag Prerna Kasautii Starplus Upcoming accident twists Anurag goes to help Veena after getting emotional on knowing about her financial difficulties. He tells her that he needs the shawls to gift to his friends. He has an aim to help her. Veena holds him responsible for Prerna’s loss. She doesn’t want any help from him. She refuses to sell the shawls to him. He keeps the money at the stall and buys a shawl. Anurag rushes away before she stops him. Veena rages since she hates him. Suman tells her that they should keep the money, since its their right to have the money for the sold shawl.

Veena doesn’t keep the money and donates it. She tells Suman that she has sent Prerna with Anurag with much hope and trust, but he broke their trust by losing Prerna. She tells that she did a big mistake to unite them. Suman knows Veena’s pain and sympathizes. They get a huge shock on seeing Prerna alive. Prerna meets them and embraces. Veena is much glad to see her daughter alive. She tells that she was blaming Anurag for the loss. Prerna admits that Anurag had tried to kill her, Anurag wronged her by breaking her trust and dreams. She tells that he insulted her love for his selfish motives.

She tells Veena and Suman that she will reveal everything about the past once they go home. She wants revenge on Anurag, who disrespected her love. Nivedita and Tapur have a fight and complain to Rakhi. Nivedita reveals that Anupam and she got divorced now. She doesn’t want Tapur to keep any terms with Anupam. Rakhi asks Tapur to respect Nivedita’s decision. Rakhi’s daughter Tanisha meets the family. Anurag tells Komolika that he is going home. He doesn’t want to be with her. Kuki gets her admission process completed. She feels hesitant to call her dad, who calls her just for the purpose to know about Prerna.

He wants her to look after Prerna until he arrives. He is much worried for Prerna. Kuki is glad that he called her, but wants her attention. Mr. Bajaj finds Anurag’s picture in Prerna’s cupboard. He wonders if she will fall for Anurag once again. He wants to go to her and support, but thinks that its her right to take revenge by herself, she has to get her answers from Anurag. He doesn’t want to get between them. Anurag sends his family home. A storm occurs and ruins the pandal. Anurag tries to save the idol.

Prerna saves Veena and Suman from the fire and sends them home in time. She tries to find some way to leave. Prerna happens to see Anurag and feels he is just acting great. She has no trust in him and his deeds appearing in front of her eyes. Soon, he gets hurt and falls unconscious. She tries to seek help for him. She saves him from the fire. She wants him to die after her revenge is fulfilled. She wants to confront him and get answers for his cheat. She also gets hurt the same way and falls unconscious. Anurag and Prerna lie in the burning pandal. Kuki will try to save Prerna’s life.

Reviewed Rating for this particular episode Anurag Prerna Kasautii Starplus: 4/5
This rating is solely based on the opinion of the writer. You may post your take on the show in the comment section below.