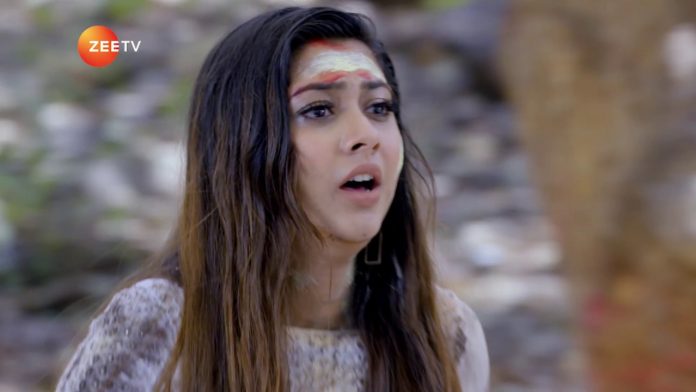 Raabta Malhar dead Promo Kalyani unveils secret Malhar reaches an abandoned car and pulls off the cover asking Mastani to come out. He opens the car door and finds Aao Saheb tied and captive inside. He asks Aao Saheb, how did she come here? Aao Saheb tells Malhar that the lady was not Mastani bai, but Atharv. Malhar is shocked and couldn’t believe. The ladies hired by Atharv tell Kalyani that her shuddhikaran will be completed when she gets married to a kinnar.

They make Kalyani sit and tied and pour milk on her head. Atharv enjoys Kalyani’s suffering and says people believe on your lie so much that nobody want to believe on your truth. Anupriya helps Malhar reaches there and stops the Shuddhikaran/aborting the baby. Kalyani gets rescued by Malhar. They try to escape. Atharv follows them with heinous intentions.

Kalyani wants to tell Malhar the truth of the baby in her womb. She wants to tell the secret of carrying Malhar’s child by the IVF process, which she had undertaken instead Sampada for saving Moksh’s life. Malhar is still mistaken that she is pregnant with Rachit’s child.

Malhar wants to know if she is fine. Kalyani asks him to listen to him first. Atharv reaches them and reveals that he is Mastani. They get aware of Atharv’s truth. Atharv stabs Malhar to kill him. Kalyani cries for Malhar. Atharv feels Kalyani and her child will suffer without Malhar. Kalyani cries to tell Malhar about their coming baby. Will Malhar die while saving Kalyani from Atharv? Keep reading.

Reviewed Rating for this particular twist Raabta Malhar dead Promo: 2/5
This rating is solely based on the opinion of the writer. You may post your take on the show in the comment section below.

Best comment by Shradha Tiwari:
I know malhar will save his wife and unborn child but I wish malhar and full family know all the truth about atharv and Kalyani pregnant with Malhar’s baby with ivf procedure.