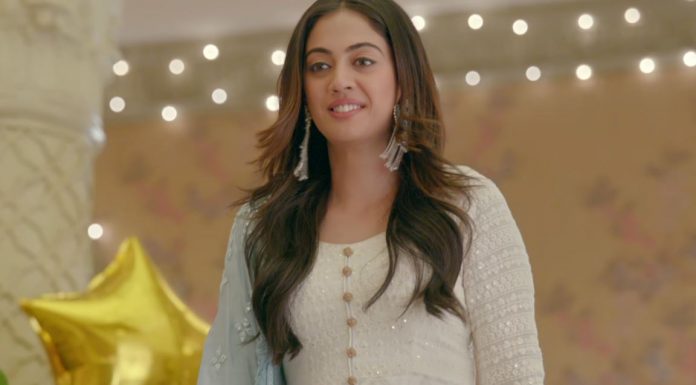 Aman Roshni Starplus Jadu Chotu to enter magical cave Aman and Roshni’s cute scenes are seen in abundance. He remembers everything that happened the previous day. He tells Roshni that she shall take care of herself in such a state. Her confusion about her state gets intensified. She wants to know why is he making an issue of her kidney donation. He wants to tell her that he is talking about her pregnancy.

She doesn’t know about her pregnancy. They have a cute banter around her weight gain. Aman calculates the times when Roshni is falling in danger. He has already seen the danger coming in different ways to her. He thinks he can save Roshni every time she falls in danger. He should have stayed back home knowing the same dangers repeating at the same time.

He takes a risk and decides to take Roshni to his farmhouse to avoid the ongoing threats. His decision gets wrong for Roshni. Aman wants to save Roshni on the second day itself. He thinks he shouldn’t drag the matter till the ninth moon usage. Meanwhile, Imran, Farah and Chotu are trying to reach the magical cave which will definitely have an answer for Laila’s curse. They are trying hard for saving Roshni. They fight their inner fears and try to cross the rocky bridge. Chotu takes a big risk and goes ahead on the stone bridge, which disperse and put him in huge danger.

Chotu doesn’t get dizzy like Imran and Farah. He decides to go ahead to the magical cave and unlock the door. Imran and Farah are worried for him, but think its the best option that Chotu goes ahead. They fail to reach Chotu and save him. They find a way to stay at the other end of the bridge and just motivate Chotu to reach the cave door. Chotu shows his bravery and gets guidance from Locha Pari, who definitely has an important role in saving Roshni’s life. Aman gets Roshni to his farmhouse for her safety. He lives under the fear. He wants Tabeezi to help him in saving Roshni. He realizes that Roshni has gone missing.

He finds her in danger once again. His scariest dreams turn true when he finds Roshni facing death again and again. Roshni learns that she will be dying again. She doesn’t want Aman to hurt himself. She takes Aman’s promise to not vent anger on himself on failing to save her. Aman is prepared to stab himself again if he loses Roshni. He has the power in hand to repeat the day again by using the third moon gifted by Chandni. Aman and Roshni’s struggle for life and death will go on for nine days until Aman uses the nine moons. Elsewhere, Chotu will be finding the magical lamp in the cave and getting the fairy out, who will be saving Roshni and Aman from evil.

Reviewed Rating for this particular episode Aman Roshni Starplus Jadu: 3/5
This rating is solely based on the opinion of the writer. You may post your take on the show in the comment section below.