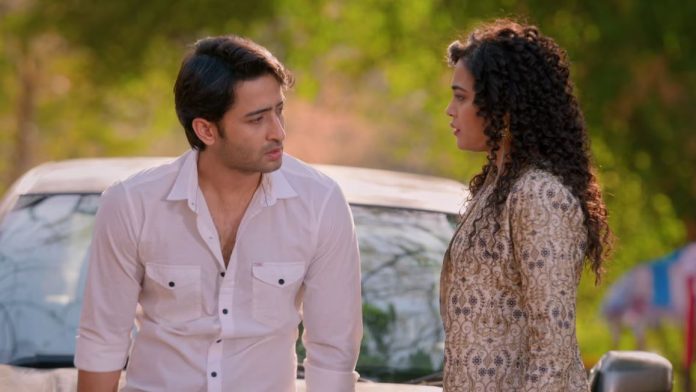 Rishtey farewell Starplus Today Mishbir union awaited Jasmeet and Varsha try to pacify Meenakshi by talking to her. Jasmeet tells that they may ask Nidhi about Meenakshi, if they can’t call Meenakshi directly. Nidhi also feels that Parul is wrong and taking advantage of Meenakshi’s generosity. She tells Meenakshi that Parul should know her place.

She feels Parul and Kunal are reaping the benefits from Meenakshi’s hardwork. Meenakshi is upset that Kunal didn’t ask her and went with Kuhu. Varsha thinks Meenakshi is much upset. She wants to find a solution of all the tensions by talking to Kunal. On the other hand, Kuhu tells Kunal that she is much worried for him, since Mishti is using him.

Kunal tells her that Abir loves him a lot and has proved it many times, Mishti has also proved her selflessness by returning the company. He wants to manage the company which belongs to him, which is actually his dream. He wants to work hard for the company. He himself wants to return home to check the new project papers. He tells Kuhu that she need not stress about Abir and Mishti’s intentions. He tells that he won’t test Abir’s love for him once again, since he had already tested Abir’s love by asking him to leave Mishti for his sake.

He doesn’t want to forget Abir’s big sacrifices. He asks Kuhu to not speak anything against Abir. Kunal tells Kuhu that he won’t ask Abir to come with them. Abir tells them that he will not let them go alone, he is also accompanying them. He supports his brother. Mishti is left behind at the resort and regrets that Abir didn’t wait for her. She also wanted to go with him, but got late. Abir and Mishti miss each other and feel bad. Kuhu doesn’t realize her mistake even when she sees Abir in sorrow.

Abir tells that he was planning the resort stay to bring the sisters together. Kuhu tells him that she didn’t wish to ruin the fun. Abir asks her to never insult Mishti for fun. He reprimands Kuhu for not accepting her mistake and always hurting Mishti. He feels sorry that Kuhu never understands them. Kunal asks Kuhu to keep herself away from the matter. He wants to console Abir. He can’t see his brother upset and away from Mishti. He wants Abir to follow his heart than giving so much importance to other relations. What will Abir do to make Kuhu realize her mistake? Keep reading.

Reviewed Rating for this particular episode Rishtey farewell Starplus Today: 5/5
This rating is solely based on the opinion of the writer. You may post your take on the show in the comment section below.