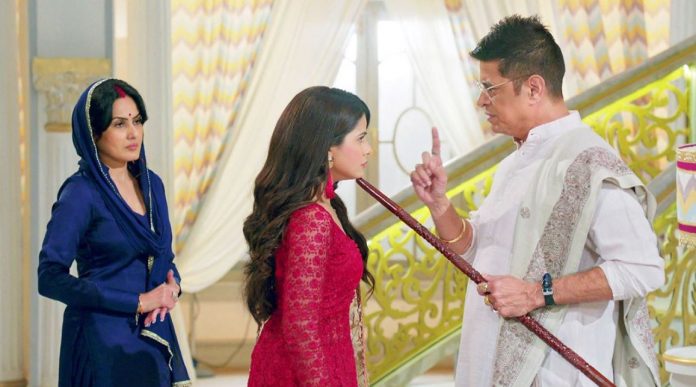 Colors Shakti Dramatic climax Virat Heer final attempt Heer gets mad to reach Virat and save his life from Harak. She shouts for help, but none listens to her. Virat argues with Harak and family for getting Heer along. Heer breaks the mirror and shocks the family by threatening to kill herself. Preeto asks Harak to spare Virat’s life. Harak doesn’t listen and makes Virat out of the house.

Preeto asks Heer to throw away the glass piece and not harm herself. Heer throws the glass. Preeto then slaps Heer in anger. Preeto clears out that Heer can’t harm her life for the sake of love. She can’t see Heer dying and recalls the promise made to Soumya. She locks up Heer once again. Heer and Virat struggle to meet after Harak lets Virat go alive.

Virat stays outside Heer’s house and tries to reach her again. He confesses her love for Heer. Heer gets hindered by Preeto. Heer tells her that if she creates hurdles, the love will not get less, it will get high. She shouts out her love for Virat. Preeto tells her that she will lock her somewhere that her voice doesn’t come out, Virat won’t be able to reach her. Heer tells that Virat loves her. Preeto tells that they will keep her locked until their hearts turn to stone, until their love gets out of her mind. She wants Heer to forget Virat. She tells Heer that they want her to understand that she has to move on in life and achieve something.

Heer doesn’t want to understand anything. She tells that she will find a way to reach Virat. Saaya gets to see Virat and recalls Harman’s madness for Soumya. Virat dislikes Kinners and gets away from her. Saaya tries to talk to him. She asks him not to behave so rudely, even if he dislikes kinners. She tells that she is emotional towards everyone. She asks him not to wander around in this manner, and return to his family. Saaya tells him that if Heer is destined in his fate, then he will surely get her. She advises him. He asks her not to curse him. He wants to be at Singh house.

Nutan tells Saaya that she should bless Virat, maybe her blessing works for Heer and Virat. Saaya doesn’t listen. Heer and Virat think of each other, and shed tears in pain. Heer doesn’t know why her family is punishing them for love. She wanted everyone to support her love story. She feels cursed. On the other hand, Virat expresses his grief to Nutan. He wants to beg Heer’s family. Nutan asks him to just shout out his righteous demand so that people get compelled to support him. She asks Virat to narrate his love story to the neighbors, until they call it true love. She supports him and asks him to prepare himself.

Heer can’t get to know about Virat. Virat gathers Singh family and neighbors to tell his love story. Nutan tells them that Virat will go after revealing his love story. She asks him to tell them how he met Heer, fell in love, married her and lost her due to her family’s madness. Virat tells them that Heer and he met in the college and fell in love, she made him realize love. He expresses his annoyance to the society’s interference. Shanno enjoys the drama and passes a phone to Heer, to show her Virat’s heroic move on the video call. Heer is thankful to Shanno. Heer cries a lot on seeing Virat’s immense love.

Virat doesn’t want anyone to call his love wrong, since he is married to Heer. Sant Baksh loses his peace after a call. He learns about Virat’s new drama. He turns angry that Virat is defaming the family. He hates kinners a lot. He instructs his aide to force stop Virat. Virat tells them that he can do anything to get Heer back in his life. He seeks the support of the neighbors, who aren’t ready to listen to him.

Virat doesn’t lose his cool and asks them to give him a chance to narrate his entire story. The people injure him with stones. Singh family feels bad for Virat. The people mock Virat’s Majnu avatar. Heer sheds tears on seeing him. Virat doesn’t deter and bears the torture. Heer wants someone to stop the angry crowd.