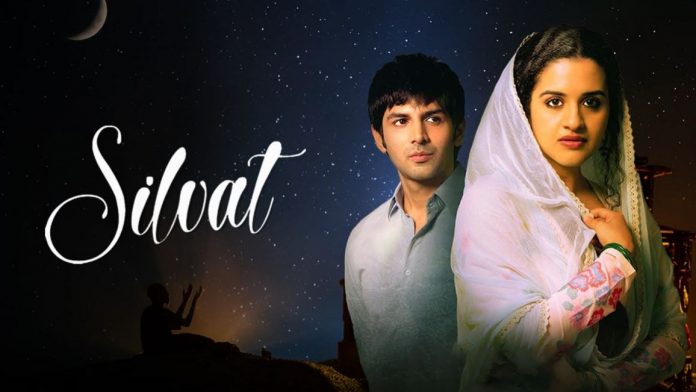 Zee5 Silvat Kartik Aaryan Meher Mistry starrer Noor gets married to Sultan, who soon leaves for abroad to acquire a good job for a decent living. Noor waits for Sultan’s return and stays connected to him via letters. Her wait gets never ending. Noor sheds tears in loneliness. She wants Sultan to call her abroad or return home. Much time passes and starts breaking her hopes.

She soon falls in love with Anwar, a tailor by profession, who is also Sultan’s friend. She shares a cordial bond with Anwar, who knows her loneliness and respects her decision to wait for Sultan. Noor and Anwar develop unspoken feelings for each other. Noor doesn’t want Anwar to know about her feelings. Anwar finds a way to meet her. He stitches her dress in a day’s time. She gets surprised when he gets her favorite breakfast.

He also wants to earn a good deed by being humble towards her. He tells her that he will also have breakfast with her. She gets tensed by his company. He makes sure that she doesn’t gets uncomfortable. He makes her smile, after a long time. Noor tries the dress and finds it perfectly stitched. Noor forgets to pay the tailoring fees. Later, Anwar and Noor meet at the Dargah, while they make prayers for their families. Noor tries to avoid Anwar, knowing her feelings for him are growing. Anwar lands up at her house. He gets a goat there and finds an excuse to spend time with Noor. She shares about her parents.

She regrets that life didn’t give her a fair chance to be with her parents. She gets emotional. Anwar makes her laugh once again. Noor and Anwar then share their common interest, poetry. Noor is philosophical. Anwar doesn’t understand poetry in depth. She gets blaming herself and turns upset when she realizes that she forgot to bring the tea powder, which had to be sent to Sultan. Anwar tries to help her. She tells him that she would not go out with him in the night’s darkness. Anwar still convinces her and takes her along to the tea shop. She buys the tea powder for Sultan. She is thankful to Anwar. Noor battles with her feelings.

She meets her friend Rafia at the Dargah. She wants to share her dilemma with Rafia. Rafia shares her painful story, of her husband who cheated her after seven years of marriage. She ended up losing everything in a greed for a good life. She tells Noor that her husband didn’t even care for her children. Rafia asks Noor about her husband Sultan. Noor tells her that Sultan went abroad soon after the marriage, its been five years now that he didn’t come back. Her patience gets endless. Rafia asks her to be patient.

Anwar meets Noor on the festive day. He gets homemade food for her. She gets inclined towards him. She learns about Sultan’s call for her. Sultan decides to return home. This breaks Anwar’s hopes. He turns disappointed with his life. Noor goes to shop for Sultan. She buys few clothes. She goes to meet Anwar at his shop. She wants to get few dresses stitched urgently. She awaits Anwar at her house. Anwar avoids her, since Sultan is going to return. She cries for Anwar, who comes to meet her for delivering her outfits. She longs for his attention. He behaves estranged. He gives the news of his marriage getting fixed.

Noor congratulates him for the new life. She promises to attend his wedding. He suppresses his frustration, which soon comes out. He goes mad in anger, on failing in his single wish, to marry the one he loves. He feels he has failed in his life by losing Noor. Noor helps him control his mad rage. She keeps her feelings within. Noor and Anwar sacrifice their love. Noor gets ready as Sultan’s bride to welcome him home on his return, after a huge heartbreak.