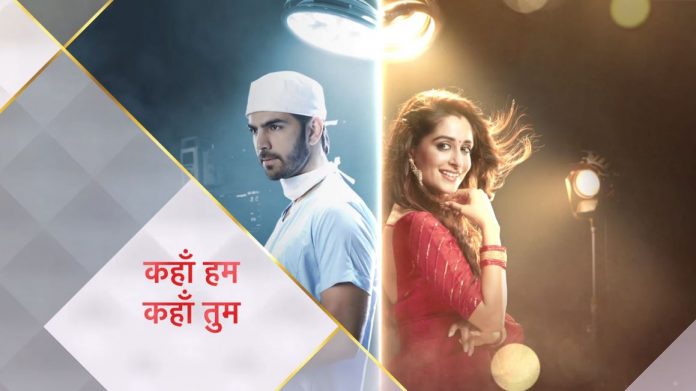 Kahaan Hum Weirdest twist Ronakshi naughty recall A sweet misunderstanding between Rohit and Sonakshi lands them in the most awkward situation on their special night. Rohit asks the staff to book the hotel room for Sonakshi and him. The staff person also leaves naughty gifts for them, which gives them wrong impressions about each other. Rohit plans to romance Sonakshi. He doesn’t know what is she expecting from him.

He thinks if she is going to attack him like a lioness. He thinks she is trying the strange costume. He mimics her while she thinks he has come to scare her. She gets jitters like a daily soap bahu feels on her wedding night. Rohit asks Sonakshi if she is completely okay. Sonakshi is scared that he is going to handcuff her.

She has seen the naughty gift, the romantic handcuffs and thinks he has planned something really odd. Rohit gets a wrong meaning after listening to her. He thinks she is up to something weird. They both think of not disappointing each other. She is troubled to find another gift, which could also be a whip. Rohit thinks she didn’t wear the costume thankfully. Sonakshi tells him that she never did such a thing before. Rohit tells her that even he didn’t play such weird game before. He gives the idea credit to her.

She tells him that she will not give up. They both get into a hilarious conversation on their special night. She wants to know what did he think before coming. He tells her that its her idea and she has to listen to him. She clears his misunderstanding that its not her idea to have such romance escapade. She tells him that she didn’t get such weird gifts. Rohit clears out that even he isn’t behind this not-so-great idea. They share a laugh over the idea of a naughty night.Note: Due to Covid-19 situation, the current show updates have stopped. We will try to collect any upcoming news and provide to you to balance out the shows abrupt closure. You may still find the upcoming news on the website. Comment below if you find any alternate content interesting or willing to read on Tellyreviews. Thanks for the continued support.

Reviewed Rating for this particular episode Kahaan Hum Weirdest twist: 5/5
This rating is solely based on the opinion of the writer. You may post your take on the show in the comment section below.

Best Comment by Jazz:
Missing khkt and especially Ronakshi and the magical chemistry they had shown on screen.
Wow phenomenal. Something to die for we can say. During my quarantine time I m rewatching khkt on hotstar and since the characters are so close by now, falling in love with it all over again.