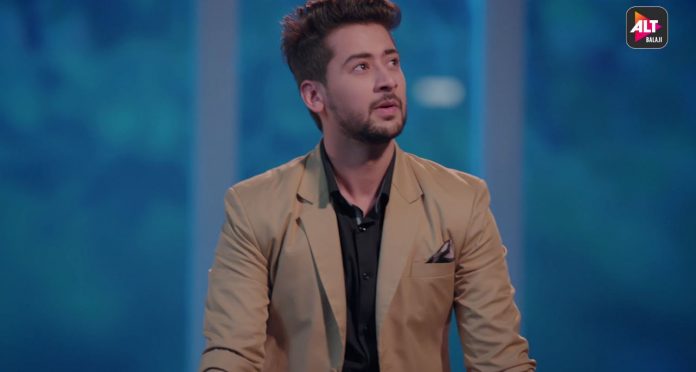 Alt Balaji Rithvik Palak Dil Hi Toh Hai Episode 8 Twisted Rithvik gets jealous of Palak and Vikrant. He wants to share his feelings with Rohit. He calls up Rohit to get some company. He informs that Palak has gone on some date.

Rohit asks him how can Palak go on a date with someone. Setu asks Rithvik not to be bothered, Ananya will be there in some time. Setu asks Rohit not to act smart and take care of the children. Rithvik complains about Palak. The staff asks him to change Palak as his doctor. Rithvik doesn’t want to change him. He tells that he will reform Palak.

Shivam and Ananya spend time. Rithvik calls up Ananya to ask if she is coming home. Ananya tells him that she isn’t coming to meet him at this time, she wanted to catch up later. She tells him that she got a boyfriend. Rithvik asks her if the guy is also a Noon. Ananya lies about Shivam. Shivam gets jealous seeing Ananya and Rithvik’s conversation. She doesn’t want him to be so immature. Ananya leaves from Shivam’s gig, being upset with his doubts on her. Rohit informs Shivam that Palak is coming to meet him. Shivam wants to fail Setu’s plans.

He thinks it will be good to call Rithvik at the gig. Setu asks Reva to get Vikrant at the gig, Ananya will handle Rithvik. Reva agrees. Palak informs Mamta about Rithvik’s behavior. Rithvik asks Rohit if Ananya is dating someone. Rohit wants him to just accompany him to the gig. Rithvik tries to know about Palak. Mamta wants Palak to have patience, until Rithvik realizes his love. Reva asks Vikrant to come with them at least for Palak’s sake.

Vikrant isn’t convinced and wants to go home. Rithvik doesn’t know why is Palak affecting him. He tells Rohit that he needs a girl for his basic needs. Mamta asks Palak to go back home and spend time with Rithvik. Rohit convinces Rithvik for accompanying him to the gig, since he may find some girlfriend there. Rithvik agrees to have some fun at the gig. He meets Shivam and wishes him all the best.

Setu thinks her plan will flop since Rithvik has come instead Vikrant. Palak doesn’t find Rithvik at home. Vikrant meets her and tells her that Rohit has taken Rithvik for the gig. Shivam tells the girls that he has called Rithvik for Palak. Ananya tells them that Palak isn’t coming, she was going home for Rithvik. Reva tells that Vikrant and Palak are together at home. She thinks their plan worked.

Shivam tells that Palak isn’t coming. The girls get a laugh. Rithvik is happy that Palak isn’t coming. Vikrant tells Palak that he will take her to Rithvik. Palak sounds positive. She tells that she is totally fine. Palak feels she has done much wrong with Vikrant. She apologizes to him because of her guilt. Vikrant doesn’t want her apology. He knows she is honest and never gave him false hopes. Shivam sings and gets applauded by the family and friends. Rithvik imagines Palak. He thinks he is going crazy.

Palak thanks Vikrant for all his help. She tells him that they will be friends forever. She tells that he is her best friend, she treasures him. He asks her for a dance on her favorite song. Vikrant and Palak have a dance, while he gets emotional with her parting away. She tells him that he can never be Rithvik.

Reviewed Rating for this particular episode Alt Balaji Rithvik Palak Dil Hi Toh Hai Episode 8 Twisted:4/5
This rating is solely based on the opinion of the writer. You may post your take on the show in the comment section below.