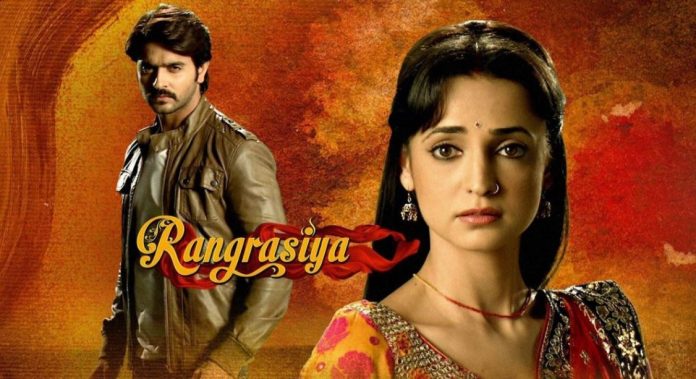 Rangrasiya Colors Season 2 Same Leads chemistry wanted Rangrasiya revolves around a simple village girl Parvati, who is orphaned and doesn’t have any support in her life. Her marriage gets fixed with a guy Varun. Parvati aka Paro hates the Border Security Defence officers for killing her parents. She holds them responsible for turning her into an orphan. She gets raised by Thakurain.

Tejawat plans to get the arms smuggled across the border by getting Paro and Varun’s wedding done. He wants the wedding procession to cover up his crime. BSD officer Rudra Pratap Ranawat gets the lead about the arms smuggling. He hinders the procession and catches hold of fraud Varun, who has married Parvati by now. He shoots down Varun. Varun dies in front of Paro. She blames Rudra for killing her husband.

She was a newly wed, turned into a widow because of Rudra’s rage. Rudra doesn’t spare her and suspects that she is also involved in the smuggling scam. He arrests her for the interrogation phase. Paro gets too disturbed with the series of events in her life. He wants to become a witness for the incident. He hopes that she testifies in the court. Paro agrees to testify. Tejawat learns about Paro’s decision. He hires the goons to get her killed. Rudra realizes that he has to protect her some how until the court case hearing. He takes her home to protect her. Her life starts changing then.

Rudra gets helpless when his aunt Mohini insults Paro’s character for coming to live with a young guy. Rudra’s decision to bring her home gets questioned. His dad announces that Paro is Rudra’s fiancee. Rudra and Paro get into the drama in front of the family. Paro learns that Rudra’s mum had eloped with her lover, leaving behind little Rudra.

She feels sympathetic on knowing about his past life. She starts connecting with Rudra emotionally. She doesn’t know that the lady, Thakurain who raised her is Rudra’s mother. Rudra begins to confide his feelings. Rudra and Paro gradually fall in love. Rudra and Paro decide to get married. Paro gets mislead by Tejawat and flees from the wedding. She then learns that Tejawat got her married to Varun for the goals of smuggling.

She realizes her mistake of doubting Rudra. She feels more in love with Rudra and returns home to marry him. She tries hard to win his love, after clearing the misunderstanding of betrayal. After facing many hurdles, they finally unite. Do you also want Rangrasiya Colors Season 2? Shoot in your comments to express your likes and dislikes on the show.