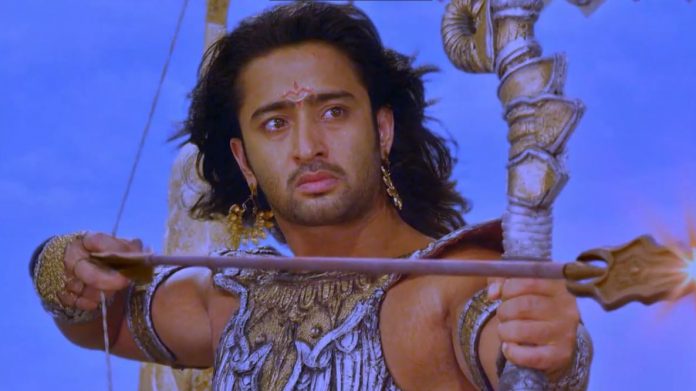 With much pain in his eyes, Arjun aims to kill Karna. He manages to get his hold on his arch rival Karna, who was supporting the wrong doer Duryodhan in the epic battle of Kurukshetra. Arjun shoots his bow at Karna, who waits for his death happily to get free of his sins. Karna gets shot by the powerfully shot arrow.

With Karna’s death, Arjun also shatters. Their mother Kunti gets to sense Karna’s demise. Duryodhan can’t believe Karna’s death when he gets the news. He rushes to see his good loyal friend Karna. Shakuni feels Karna had cheated him. The Pandavas are happy that evil Karna is dead. Arjun and Karna weren’t aware that they are born to the same mother, they are brothers. They had become enemies by the twist of fate. Karna holds no regret to die by Arjun’s hand and smiles in his last moment.

The Pandavas count Karna’s sins and think justice has happened that Karna died. The battle of Kurukshetra goes on. Arjun gets the knowledge of his responsibilities from Krishna. He pledges to kill the sinners, without being biased towards any relation. Mahabharat brings a tale of brave Arjun, who gets mentored by Krishna to eradicate the evil from the world.

Aired on Star Plus in the year 2013-2014. The show is currently airing on the channel to fill up the ongoing show closures due to the stalling of the shoots. Cast: Saurabh Raj Jain as Shri Krishna, Shaheer Sheikh as Arjun, Pooja Sharma as Draupadi, Aham Sharma as Karna, Arav Chowdhary as Bhishma and Arpit Ranka as Duryodhan.

Shoot in your comments to express your likes and dislikes on the show. StarPlus airs Mahabharat Epic battle Arjun kills Karna.