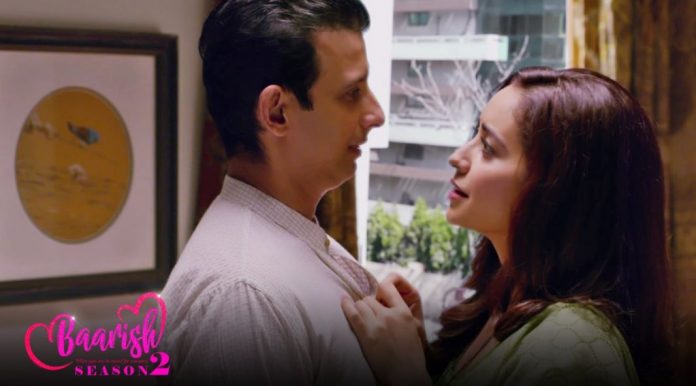 Baarish 2 Anuj Gauravi complications begin to knock Episode 2 Anuj confronts Rishi and Shreya for their decision to run away from the family. Shreya creates a scene. Anuj doesn’t want his siblings to hurt anyone’s sentiments. He wants Rishi to take responsibility of his mistakes. He feels Rishi has cheated them. Rishi wants to be the face of Mehta diamonds and run the company. He doesn’t want Anuj to name the company to Gauravi.

Anuj doesn’t want to forgive Rishi for getting Gauravi arrested in the fraud case. Rishi wants Anuj to be happy with Gauravi’s family. He wants to take his mom along. He invites Anuj to the family. He doesn’t want to get Gauravi in the family, thinking she is a gold digger. He argues with Anuj over his rights on his mom. Anuj asks him not to insult Gauravi’s family. Shreya also supports Rishi. Anuj’s mom decides to stay with Anuj.

She blames them for ruining Anuj’s life. Aniket asks them to leave. Shreya insults Aniket. Rishi and Shreya fail. Anuj regrets that Rishi and Shreya have failed his teachings. He tells Gauravi that he regrets his life’s down time. Anuj gets saddened. Gauravi makes him smile and compliments him. She cheers him up. Anuj’s mom Padmini feels she has made a big mistake to get Shreya and Aniket married, which has affected Gauravi and Anuj’s life. Gauravi prepares Anuj for his interview. Anuj answers her. Gauravi jokes on his daringness. She pulls his leg. They have cute moments.

Rishi asks Shreya the reason for her breakup with Rohit. She tells him that Rohit wanted to marry her, so she had to dump him. She checks about Rohit’s life. She learns that Rohit is getting engaged to Asmi. Rishi can’t believe that Gauravi’s siblings are so after ruining their lives. Rishi tells Shreya that she left a rich guy and married a guy from the chawl, Aniket. He asks why did she marry Aniket when she didn’t like the concept of marriage when Rohit proposed her. Shreya doesn’t want Rohit to marry Asmi.

She plans to stop the marriage. Anuj and Gauravi continue to have their romance, secretly. They both look for a job. Anuj feels broken seeing his family adjusting. He wants a job at the earliest. Gauravi supports him and wants him not to lose hopes. Anuj doesn’t feel happy to stay with his in-laws. She doesn’t want him to think so much. Gauravi gets a good news. She gets a job and shares the news with everyone. The family is happy for her. Anuj feels confused that he will be sitting at home when his wife goes to work.

He meets Saurabh and Zeenia. They tell him that its times of equality and one shouldn’t get ego in between. Anuj goes for his next interview. He gets confident with each interview. Anuj was hurt that he wasn’t getting a job. He meets Rakesh, who is a job consultant. He has his own business, who is an expert in diamonds business. He asks Anuj to travel to Gujarat for the job. Anuj refuses to the offer, since he can’t leave his family behind.

Rakesh thinks Anuj will be the suitable person to run his business. Aniket meets his girlfriend Dipti. He tells her that he didn’t think of dating. She wants him to reveal their relationship to the family. Anuj and Gauravi head for their work. The family is hopeful that Anuj also gets a job. Shreya comes to meet Gauravi’s family to insult them. Anuj and Gauravi visit the jeweller. Gauravi gets the rings back from the jeweller by paying from her salary. They exchange the rings again. Hasmukh, the jeweller, requests Anuj to join his business to help it prosper.

Anuj gets a job. He gets much happiness. He runs home to tell his mom about his job. He learns that Shreya had come to take his mom home. Anuj calls Shreya to know why Padmini left. He learns that Padmini wanted to go home herself. Padmini tells him that she didn’t like to stay in Gauravi’s house. Anuj didn’t know what went wrong. Padmini took the practical decision. Anuj felt Padmini was hiding something.

Reviewed Rating for this particular episode Baarish 2 Anuj Gauravi complications begin to knock Episode 2: 4/5
This rating is solely based on the opinion of the writer. You may post your take on the show in the comment section below.