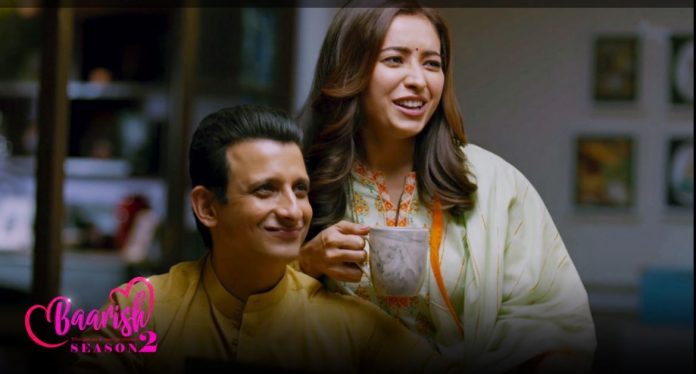 Baarish 2 Episode 3 Anuj Gauravi new journey Anuj gets worried that his mum suddenly left. Gauravi explains him that Shreya and Rishi will take better care of their mum, who will find comfort in her own house. She cheers up Anuj. Later, Gauravi gets to see Deepti’s message on Aniket’s phone. She confronts him about Deepti. He tells her that he won’t hide anything if he gets serious about Deepti.

She reminds that Shreya is still his wife. She asks him to think about the dire consequences, if his affair gets known to Anuj. Anuj and Gauravi share a bus ride. He feels that they have come much closer. He reminisces their life’s journey. They spend time at the beach. Later, Anuj looks for a house. He wants to buy an affordable house.

Zeenia jokes that Saurabh is totally useless. Gauravi praises her husband Anuj, who is keeping her really happy. Anuj wants to earn money and then shift with Gauravi. Anuj gets surprised when Saurabh calls him and informs about a house rent deal. He shares his happiness with Gauravi. They have a rain moment again. Shreya gets ready to meet Rohit. She doesn’t want Rohit to marry Asmi. She thinks to meet him and spoil his date. She reaches the hotel and finds them. She spoils their dinner date by acting crazy.

She tries to insult Asmi. Rohit tells Shreya that he knows Asmi well, since she works for him in his firm. Shreya tells that Gauravi used to work for Anuj and then married him. She asks if Asmi is also much smart like her sister. She questions Rohit about his marriage decision. She ruins Asmi’s joy by spoiling her dress. She flirts with Rohit by distancing Asmi. Shreya leaves them upset.

Anuj gets much joy and peace in his new house. He already sees a home in the small house. He doesn’t imagine the days he is going to see from now. Anuj and Gauravi take the family’s help to settle in the new house. Aniket finds Asmi upset. He doesn’t want to start any new issue. She complains about Shreya. He asks her not to fall to Shreya’s level.

Gauravi’s dad teases Anuj by messaging him from Gauravi’s phone and calling him to the kitchen. He then pulls Anuj’s leg. He gets fun by troubling Anuj constantly, portraying a naughty father-in-law’s role. Anuj catches his mischief. Anuj tells Gauravi that they will be back to their business now, he will open a small diamond store soon, thanks to Hasmukh’s support. He bids a farewell to Hasmukh’s business. He feels bad to leave the job at Hasmukh’s store. He believes that Hasmukh is a great man.

Anuj finds Aniket with Deepti. He wanted Aniket to be committed to Shreya. He didn’t think that Aniket will make his marriage suffer. Anuj and Gauravi take the matter home. Aniket tells that Deepti is his friend. Anuj confronts him about the affair. He asks Aniket to remember his limits and not cheat Shreya. Gauravi also scolds him for falling for Deepti. Aniket tells her that he has feelings for Deepti and accepts in front of everyone. Anuj gets disappointed. Gauravi asks Aniket to work out on his marriage by convincing Shreya. Aniket tells that his chapter with Shreya is over.

She asks him to give Shreya another chance. He gets convinced by her. Anuj and Gauravi have an argument because of Aniket and Shreya’s issues. She asks Anuj to know that he matters to her, he can’t blame her for what Aniket does. She tells him that though her family matters, even then she is trying hard to handle the issues, so that it doesn’t affect their marriage. Anuj learns about her pregnancy. She wanted to share the good news with him. He checks her medical file. He runs after her and confesses love to her.

Reviewed Rating for this particular episode Baarish 2 Episode 3: 4/5
This rating is solely based on the opinion of the writer. You may post your take on the show in the comment section below.