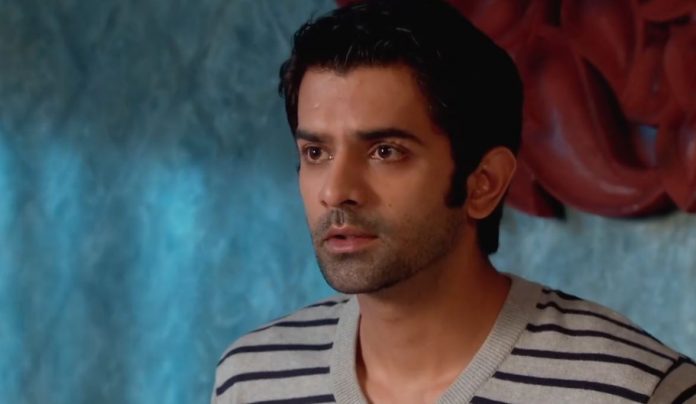 She asks Lavanya to wake up early and take a bath to come for the prayers. Manorama hurries to get ready for the prayers. She doesn’t want to anger Nani. Shyam calls up Bua’s home. He gets to talk to Khushi. He is relieved when he speaks to her. He learns that she isn’t going back to Lucknow. She tells him that she was going to Lucknow and then changed her mind. He wants to know if something special stopped her.

She tells him that she got a sign from the Goddess and returned. She tells that she doesn’t want a job now. She tells about her sweetshop. He congratulates her. He praises her cooking skills. She asks him to come soon to have sweets from her shop. Shyam tells her that he was afraid that she is going away from him. He makes work excuses. At home, he looks after Anjali and pleases her with his poetry. Anjali finds his mood better. He tells her that he will be soon going for his work purpose. He doesn’t tell about Khushi.

The family members gather for the prayers. Nani doesn’t want Manorama to help Lavanya. Khushi is excited to make the sweets. She tells Bua that they have to make fresh sweets. Bua is troubled by the huge stock. She asks Payal and Khushi to not prepare the food and eat the sweets. She tells that money doesn’t grow on the plants, they have to learn earning and saving well. Khushi gets an idea to get orders from the hotels and make sweets accordingly. She hopes that this solves Bua ji’s problems.

Manorama wakes up Lavanya, who is sleeping till late. She asks Lavanya to get ready soon. Bua ji is happy with Khushi’s ideas. She wants the idea to work. Khushi is hopeful that the business will reach new heights. Nani waits for Arnav. Anjali tells that he won’t be coming for the puja. Even Lavanya turns up late and annoys Nani. Lavanya apologizes to Anjali. Lavanya tells Manorama that she didn’t go for the bath and got ready in just 10 mins.

Nani learns that Lavanya has come for the prayers without taking a bath. She scolds Lavanya for going against her and disrespecting her. Arnav and Khushi fall weak when they think of each other. He doesn’t know why he is thinking about her so much, so she doesn’t matter to him. He wants to forget her. He gets angered on himself for failing to do so.

Reviewed Rating for this particular episode IPKKND Arnav emotional conflicts to forget Khushi: 4/5
This rating is solely based on the opinion of the writer. You may post your take on the show in the comment section below.