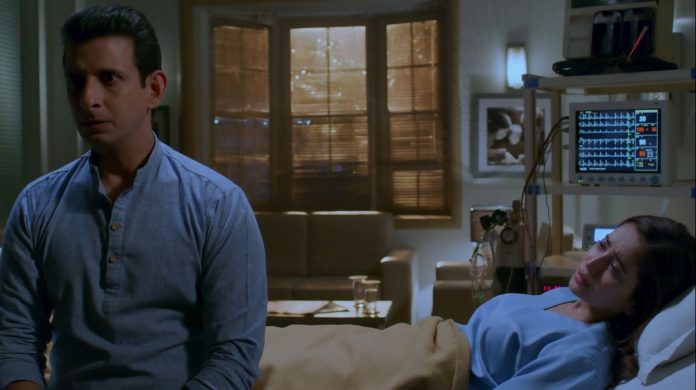 Baarish New Season Episode 5 Anuj faces huge trauma Anuj loses the diamonds worth 5 crores. He gets too distressed. He informs Gauravi and Saurabh. Saurabh doesn’t think that there is any solution now. Anuj feels that he should buy the shop gifted by Padmini. Saurabh tells that no one would be buying the shop so soon. Anuj gets struggling to arrange the money.

Saurabh informs Padmini about Anuj’s huge problem. Padmini meets Anuj and offers help. She tells Anuj that he should have told her about the problem. Anuj doesn’t want to trouble Gauravi in her pregnancy. Padmini asks him to either accept help from her or ask out Asmi to return the fixed deposits which he gifted to her. Anuj doesn’t want to take back his gift. Gauravi also thinks to talk to Asmi and take the deposit back.

Padmini comes up with an alternate option. She goes home and talks to her children. She requests Rishi’s girlfriend Phalguni to leave until the family discussion gets over. She wants either of Rishi or Shreya to help Anuj, when Anuj isn’t willing to ask Asmi for help. Anuj tells Gauravi that Padmini will try to help them by speaking to Rishi and Shreya. He asks her not to worry for anything, since he is working hard to sort their problems.

Rishi and Shreya refuse to sign on the property papers. Padmini tells them that Anuj would be jailed if the jeweller files a case for the diamond theft. Shreya agrees to sign the papers. Rishi tells Padmini that he will read the document well and then sign it. Shreya tells that she is willing to help Anuj. She signs the papers. Anuj assures the jeweller that he will deliver the diamonds soon. Padmini assures Gauravi that Rishi would also help Anuj. Phalguni asks Rishi about the family matter. Rishi enjoys the good news. He tells that Anuj is in a big mess. He thinks its time to celebrate. Gauravi comes home to meet Rishi.

He wants to insult her and break her esteem. Gauravi informs Rishi about Anuj’s big blunder. She asks his help. Phalguni asks Gauravi to beg for money. Rishi tells Gauravi that they aren’t family. Gauravi asks him to melt his heart at least for Anuj. Rishi tells that she should get desperate and make him interested in the deal. He tells that the world is selfish and that’s how it goes. Gauravi gets enough of the insult and leaves. Padmini informs Anuj that Gauravi had come home and spoke to Rishi.

Anuj rushes to find Gauravi. She loves Anuj a lot and sheds tears of sorrow. Padmini asks Rishi about insulting Gauravi. Rishi asks her not to distinguish between her kids. He wants her to be silent, as she was silent when Anuj insulted him for the sake of Gauravi.

Asmi decides to postpone her marriage until Anuj’s problem gets solved. She gets ready to help Anuj. Anuj tries to contact Gauravi, who returns home in a broken state. Anuj fails to find her. He returns home and finds her fallen unconscious. He gets panicking. Anuj takes her to the hospital and hopes that their child is fine. He gets the bad news that Gauravi lost their baby.

Gauravi weeps that they lost their baby. They both get into a trauma. Anuj feels that they lost the baby because they didn’t had money. He gets depressed. He tells that even their siblings didn’t help them with money. He feels guilty, accusing himself as the reason for the baby’s loss. He promises her that he will never let her feel short of money ever in her life, since money matters the most in the world. Anuj gets bitter-hearted with the shocking incident in his life.

Reviewed Rating for this particular episode Baarish New Season Episode 5: 3/5
This rating is solely based on the opinion of the writer. You may post your take on the show in the comment section below.