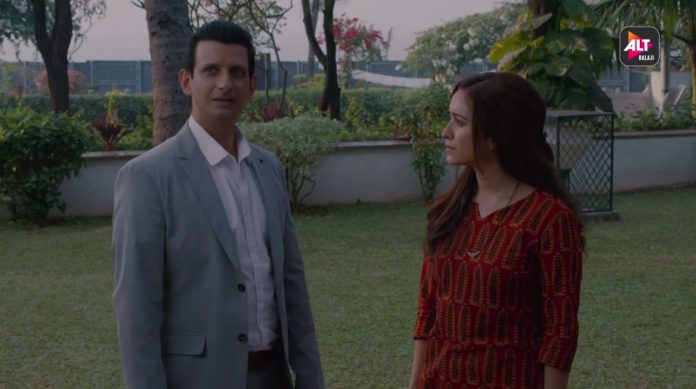 Baarish Altbalaji Episode 9 Complications arise for Gauravi Gauravi gets pregnant once again. She plans to discuss the matter with Anuj, since her doctor had already explained her about the pregnancy complications. Gauravi wants to take Anuj’s opinion in taking ahead the pregnancy. Gauravi finds Anuj changing a lot. He gets obsessed to get the best of everything for her.

Gauravi takes Anuj home. She tells him that she is happy with him, their life is already the best. Anuj tells her that he is trying his best to keep her very happy. His guilt over his baby’s loss makes him completely changed. She gets stressed about his behavior. She feels he is losing himself. She misses the old kind-hearted Anuj. He requests her to always be with him. She promises him that they will be together forever.

Later, he gets his senses in the morning and apologizes to her for putting her into an awkward situation. She tells him that nothing went wrong. She plans an outing with him. He tells her that his schedule is packed up. Meanwhile, Asmi tells Rohit that Anuj has paid off all his loans. She tells that they can get married now. She wants to share the marriage expenses costs. Rohit feels she is the best and expresses his love. Shreya keeps a watch on them and is much jealous. She meets Rohit and warns him about Asmi.

She tells him that Asmi is after his money. She creates a misunderstanding between Rohit and Asmi. Rohit confesses that he used to love Shreya a lot. Shreya tells him that she has lost his love and regrets a lot. Asmi watches them together and fumes. Shreya succeeds in her plans.

Aniket tells that he will speak to Rohit. He meets Rohit and confronts him. Rohit tells that Shreya is chasing him, he wants to marry Asmi, since he loves Asmi. He feels fortunate that he didn’t marry Shreya. Anuj takes Gauravi to the lavish house. Anuj plans a good life with Gauravi.

He shows her the beautiful house, which he bought, keeping her in his thoughts. He asks her to get any good interior designer and get the house decorated. He gets busy in his goals to earn much money. Gauravi feels lonely. Shreya meets Aniket and insults him. Aniket calls it enough. He warns her against her evil ways. He tells her that he will move on with Deepti.

He doesn’t want her to create more drama. Gauravi goes for her check up. Doctor tells her that her husband should be with her. Gauravi wishes that Anuj was with her. She recalls her first pregnancy, when Anuj was with her to look after her. On the other hand, Phalguni meets Anuj and apologizes to him for her past mistakes. Anuj forgives her. Phalguni fools him on Rishi’s command. She informs Rishi that her plan worked. Anuj gets Shreya’s call. He gets against Aniket.

He asks Aniket not to take his affair seriously. Aniket tells that he has no affair with Deepti. Anuj asks him how can he threaten Shreya. Aniket tells Anuj about Shreya’s affairs. Anuj believes his sisters. He asks Aniket not to divorce Shreya and apologize to her. Aniket gets upset with Anuj’s rude behavior. He meets Gauravi and complains about Shreya. He tells Gauravi how Shreya made a clean image and instigated Anuj against him. He tells that Anuj has threatened him. He tells that he will do whatever he wants, he won’t respect his relation with Mehtas. Gauravi gets worried.

Reviewed Rating for this particular episode Baarish Altbalaji Episode 9 Complications arise for Gauravi: 2/5
This rating is solely based on the opinion of the writer. You may post your take on the show in the comment section below.