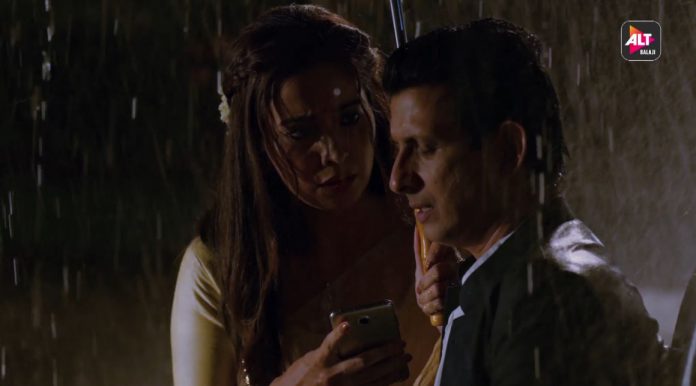 Alt Balaji Baarish Episode 10 Shreya fakes a suicide Gauravi feels dizzy and takes medicines. She speaks to her doctor. Anuj still doesn’t know about her pregnancy. Gauravi informs him about Asmi and Rohit’s marriage. She wants their families to attend the marriage. She asks Anuj if Shreya will be okay to attend the marriage. Anuj tells that Shreya will not cry on her past, she isn’t like Aniket, who doesn’t know in keeping relations.

He calls up Shreya to tell her that he has explained Aniket well. He informs her about Asmi’s marriage and invites her. Shreya tells that she will not miss the marriage. She acts sweet. She vents her anger after disconnecting the call. Anuj tells Gauravi that Shreya is more mature than Aniket. He asks Gauravi to explain Aniket that people should talk to end their differences. Gauravi feels that their marriage is also lacking good communication.

She wants Anuj’s time. She meets Zeenia and tells her how Anuj’s change is affecting her. Zeenia asks her not to destroy her marriage. Aniket doesn’t want to give false hopes to Deepti. He tells her that he likes her, but he is still a married man, Shreya isn’t divorcing him. Deepti is willing to wait for his love. She is happy that he honestly shares everything with him. She wants to marry him, since he is a gem at heart. Anuj and Gauravi enjoy the family time in Asmi’s pre-marriage functions. Anuj is ready to gift anything to Asmi.

Asmi asks Anuj and Gauravi to perform her Kanyadaan. Anuj blesses her. Aniket asks Anuj to try the kurta bought by Asmi for him. Anuj explains him that its not necessary that everything is perfect, one should learn to adjust. Aniket gets upset that Anuj always lectures him. Shreya arrives in Rohit’s wedding and loses her smile. Rishi gets helpless to attend the wedding. Rohit and Asmi get ahead with the marriage rituals.

Gauravi feels nausea. She hides about her pregnancy. Anuj doesn’t like Aniket inviting Deepti in the function. She tells that Shreya will be hurt to see Deepti. Aniket tells that Deepti is his friend, he won’t care if anyone feels bad. He feels insulted because of Shreya. He tells that Shreya and he don’t want to be together. He doesn’t want to suffer. Anuj and Gauravi get into an argument over the matter. Shreya enjoys their arguments.

Aniket tells Deepti that its better if Shreya’s truth comes out. Shreya insults Aniket and Deepti. She gets to see Anuj around. She pulls up a drama. Aniket understands her drama. Shreya plans to fake suicide and wishes Anuj comes to her rescue. Anuj saves Shreya in the nick of time. Rishi blames Aniket for destroying Shreya’s life. He asks Anuj to take a stand for Shreya if he really cares for her.

Reviewed Rating for this particular episode Alt Balaji Baarish Episode 10 Shreya fakes a suicide: 3/5
This rating is solely based on the opinion of the writer. You may post your take on the show in the comment section below.