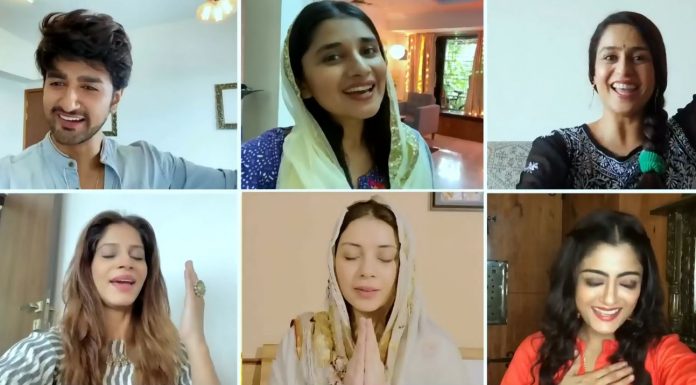 Guddan first episode Lockdown tales Akshat’s challenge Akshat and Guddan have a video chat. Guddan misses him in her aunt’s house. She feels everyone is living away due to the lockdown. Ganga tells Guddan that Durga will get fine and come back to them soon. Guddan wants her Bahus to have a family meeting with her. She calls up Durga, Laxmi and Saraswati. The Bahus end up arguing.

Saraswati is questioned to reveal the actual problem between them. She doesn’t like to tell anything. Ganga tells Guddan that they all should take care of themselves in the times when the pandemic is turning people ill. Laxmi gets against Durga, who was making fun of her. Laxmi calms herself down. Guddan speaks to Akshat with love. Akshat tells Guddan that they can just see each other on the video call. Akshat teases her.

She tells him that they are getting away even after the lockdown. Akshat tells her that everything will get back to normal in some days. Akshat laughs on her cute antics. He praises her for always coming up with great solutions. He asks her to prove it once again that she can do anything. He believes her that she is the best person in his life. Guddan plans to bring her Bahus together again.

Saraswati is the one who has created a rift between Akshat and Guddan. She enjoys the drama in Guddan’s life. She doesn’t want them to get united. She thinks its the right time to separate Guddan and Akshat. Guddan isn’t aware of Saraswati’s ill feelings. Guddan gets the family for the aarti. She inspires them to keep patience and pass the tough time with the family’s strength. Saraswati knows that Guddan is alone and weak. She wants to attack Guddan and threaten her. She calls up her goons and plans to get Guddan threatened. She doesn’t want Guddan to return to the Jindal house.

Ganga likes the way Guddan explains the family. She praises Guddan for her unique ways. Akshat loves Guddan more since she has brought Durga and Laxmi together. Durga and Laxmi apologize to each other. The goon reach Guddan’s house to trouble her. Guddan gets scared for a while, and then occupied with Akshat’s calls. Guddan reminisces the old times. She tells him that she has united Durga and Laxmi, thanks to his motivation. She tells that everyone is still upset. He tells her that he is also upset that he is away from her. She asks him to come up with some idea.

They feel the presence of some outsider around. Guddan checks the place and doesn’t see the goon. She challenges Akshat to do something unusual for her. He accepts the challenge. The goon demands more money from Saraswati. She is ready to pay anything to get Guddan in trouble. Akshat and the family members surprise Guddan on the video call. They cheer up Guddan and make it a special moment. Akshat informs Guddan about Mrs. Lockdown competition. He tells her that he will give a challenge to her and Bahus every day, he will reward ten lakhs to them for charity purpose to the winner who wins more tasks.

Guddan wants to know the kind of challenges. Durga tells her about the easy challenges. Akshat tells about the first challenge round of dance. Guddan wishes all the best to her Bahus. She gets stressed about winning the competition. He tells her that she will manage the dancing round easily, since she is already a super star. She faints down and this puts him in tension.