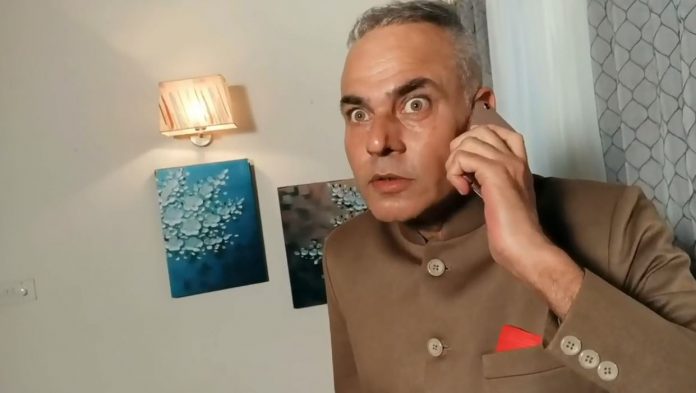 Kumkum Bhagya Latest Dushyant threatens Ranbir Ranbir and Prachi find Maya outside the hotel room. Ranbir tells Prachi that even if Maya forces him for marriage, he hates her and will divorce her soon. Prachi asks him why would he ruin Maya’s life. Ranbir expresses that he really hates Maya. He is happy to see Prachi. Prachi thinks she is also liking Ranbir now. Meera connects to Dimpy again. She learns that Rhea is drunk and not in senses to talk. She wishes she could speak to Rhea.

She feels she has failed as a mother, since she didn’t know what’s happening in Rhea’s life. She blames herself. She hopes Rhea is okay. Maya takes the step to end her life. She is upset to think of Ranbir’s words. She changes her plan to burn Prachi alive. She speaks to her uncle, who apologizes to her for not attending her engagement. He tells her that she will be marrying soon, he has come to Delhi just to meet her. He tells that he will help her even in her bridal shopping. Maya tells him that she is going too far from them.

He promises to get her life back on track. She angrily blurts out the truth that her marriage isn’t happening, Ranbir broke her heart and is cheating her, he loves Prachi. She tells how Ranbir rejected her. He gets mad in anger on hearing her cry. She threatens to end her life. He tells her that he can’t tolerate her tears, he will not let Ranbir ruin her life. She tells him that Ranbir hates her, she won’t marry him. He promises her to get Ranbir for her. He doesn’t want her to commit suicide. He gets worried for her life.

He calls up his brother Chobey to inform about Maya’s suicide. Ranbir calls up Pallavi to share the good news that they got rid of Maya. Pallavi is glad to know it. He tells Pallavi that he will soon come home and give the good news to Dida. He looks for Maya. Maya doesn’t want Ranbir’s hatred and rejection. Her uncle calls her again to stop her. She tells him that Ranbir hates her and now she won’t be alive. She stumbles and drops her phone. Her uncle Dushyant Singh Chobey thinks she has jumped down the terrace and committed suicide. He gets terrified on hearing her scream.

Ranbir tells Prachi that he will soon get free of Maya and now he can life his life well. Ranbir gets the call from Maya’s uncle. He feels strange. He wants his break up to get official. He doesn’t want to answer. Dushyant calls Mr. Sharma to take his help for Maya’s matter. He asks Sharma to teach a lesson to Ranbir Kohli. He sends Ranbir’s picture to Sharma. Pallavi gives the good news to Prachi that Maya will be freeing Ranbir soon. Pragya understands Pallavi’s happiness. Pallavi thanks Pragya and Prachi for saving Ranbir’s life. She sings praises of Prachi. Pragya congratulates her. Pragya thinks Prachi would be sharing the good news on confirming it from Maya.

She is happy for Ranbir, who deserves true love and happiness. Dushyant calls Ranbir to threaten him. He yells at Ranbir. Ranbir wonders why is Dushyant so angry at him. He disconnects the call. Dushyant calls him again. Ranbir tells him that he doesn’t love Maya and wanted the breakup. He was threatened by Chobey to marry Maya. Dushyant asks him why did he cheat Maya. Ranbir tells that Maya misunderstood him and got after him. He complains about Chobey. learns about Maya’s suicide. He can’t believe the unexpected news. Dushyant threatens to ruin Ranbir’s life, to punish him for provoking Maya for the suicide move.

Reviewed Rating for this particular episode Kumkum Bhagya Latest Dushyant threatens Ranbir 8th July 2020: 4/5
This rating is solely based on the opinion of the writer. You may post your take on the show in the comment section below.