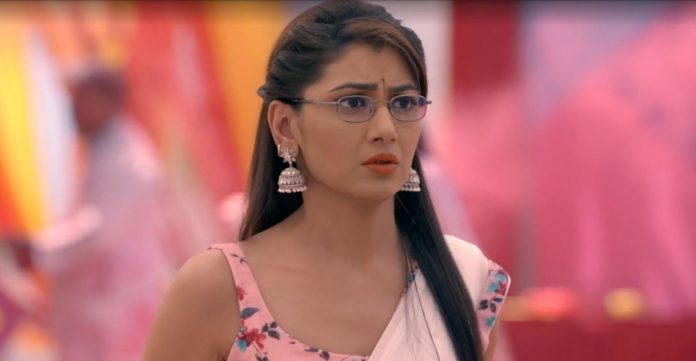 Kumkum Bhagya Pragya receives an enormous shocker Prachi speaks to the police officer. She gets worried when the officer asks her to give a statement again. Prachi pleads her innocence. Meera informs Rhea about Maya’s suicide. She tells Rhea that Ranbir and Prachi are in trouble for Maya’s suicide. She asks Rhea not to come home and be at Dimpy’s place until the mess gets solved. She wants Rhea to be saved. Dimpy assures that she will not let Rhea turn more upset. Meera wants to keep her relation and loyalty towards Rhea just like her mum would go. Meera loves Rhea a lot. She just wants Rhea’s safety.

The officer tells her friend that she had to come to the hotel for solving the suicide case. She questions Ranbir and Prachi, since both are suspects. Prachi and Ranbir want to meet once. The officer doesn’t allow Prachi. Ranbir tells that he wants his lawyer. He fails to get help. Dushyant makes the video call to Sharma. He gets to speak to Ranbir, who also pleads his innocence. Dushyant wants justice for Maya at any cost.

He asks Sharma to put Ranbir in the jail. Ranbir gets a shock. Prachi fails to call anyone. She requests the officer to allow her to call her mum. She calls Pragya and informs that she is okay. She tells Pragya that she is coming soon. Pragya thinks Prachi is hiding something, maybe she is in trouble. She wishes that her daughter gets fine. Prachi and Ranbir shout out to each other out of concern. Pallavi waits for Vikram. She wanted to tell him that Ranbir is free from Maya now. She calls Ranbir and asks him to speak to Vikram.

Ranbir tells her about the huge mess. She worries and asks him why didn’t he share the problem before. She gets emotional. He tells her that Maya attempted suicide and is dead. He reveals that Prachi and he got arrested with the charge of provoking Maya for the suicide. Pallavi can’t believe the blame. He tells her that he will soon solve the problem. He wants her to stay fine. The police questions Prachi about her affair with Ranbir. Prachi clarifies that Ranbir is just her friend and they both aren’t behind Maya’s suicide. Pragya worriedly calls Prachi. The officer doesn’t listen to Prachi. Pragya and Prachi fail to talk.

Pallavi fails to connect to Vikram. Aryan meets Pallavi and informs about Ranbir’s arrest. Pallavi asks Aryan how could they help Ranbir. She feels helpless and sheds tears for Ranbir. He tells that he will take help from Aaliya. Pragya calls up Ranbir to know about Prachi. Sarita thinks Prachi and Ranbir had a fight. Ranbir answers Pragya’s call. Sharma informs Pragya about Prachi and Ranbir’s arrest for Maya’s murder. Pragya learns that the interrogation is going on. She panics on knowing the entire matter. She scolds Sharma.

Reviewed Rating for this particular episode Kumkum Bhagya Pragya receives an enormous shocker 10th July 2020: 4/5
This rating is solely based on the opinion of the writer. You may post your take on the show in the comment section below.