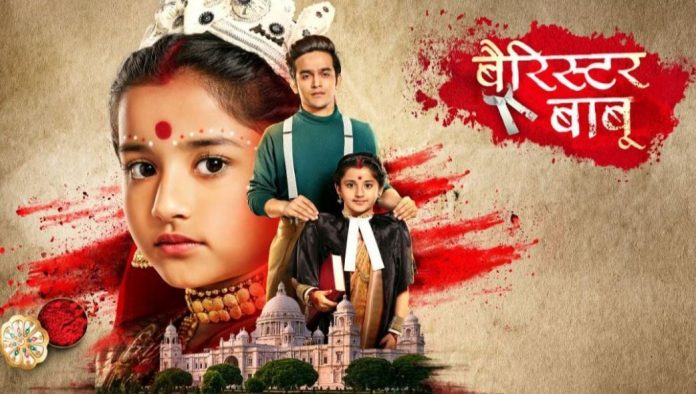 Barister Babu Anirudh loud defense for Bondita 13th July 2020 Bondita is in a fix to deal with the tough situation. She has to get rid of Batuk’s clothes and dress up in feminine avatar again. Bondita doesn’t want to upset Trilochan again. She thinks only Saudamini can help her in such situation. Trilochan lies to the pandits to have a good image of Bondita. He sings her praises, against her reality. He thinks to get her blessed by the pandit and also save his family’s reputation. He doesn’t want anyone to stain his pride.

Bondita gets caught by Trilochan, but manages to lie to him, that she is Batuk’s new friend. Trilochan doesn’t see her face, which she hides by the cap. Pandit asks her to have food along with them. Bondita is awaited by them. Pandit gets irked that Trilochan’s Bahu didn’t come by now. He asks Trilochan if Bondita is avoiding them or waiting for their leaving. Trilochan finds hard to calm down the pandit by his excuses and buys more time. Bondita learns that its important that a shank is played before consuming the food. She wishes to help Trilochan.

Saudamini makes a timely entry and wins everyone’s heart by playing the shank and making it possible for all the pandits to accept the food serving. Trilochan praises her, though he mentions that she isn’t Anirudh’s wife. Saudamini feels hurt that she couldn’t get the status of Anirudh’s wife. She doesn’t know where Bondita is.

She starts impressing the pandits to get more praise. Bondita conceals her identity further. She wants to take help from Saudamini. She speaks up on seeing the water getting spoiled. She asks Saudamini to bring fresh water for the pandit. Saudamini finds her in Batuk’s clothes and is surprised. She gets a chance to expose Bondita so that Trilochan throws her out of the house. She makes a plan and succeeds in showing Bondita’s make avatar to Trilochan and pandits. Bondita gets badly caught. She faces the wrath of Trilochan and pandits.

The pandit decides to punish her, on seeing her argue over the equality between men and women. He gets displeased that she intended to sit with the brahmins and dine. He punishes her by asking her to do a servant’s task. His aim is to teach her a lesson so that she never tries to get equal to men. He tells Trilochan that he will set Bondita’s mind well that she never compares herself equal to men. Trilochan agrees with the pandit. Bondita gets punished. She does the servant’s work with difficulty due to her young age. Still, she stays determined and finishes the task.

At the end, she faints down. Anirudh makes an entry home and hears the boasting pandit telling Trilochan about teaching a lesson of lifetime to Bondita. He learns that Pandit has punished Bondita for wearing boys clothes. He angrily defends his wife. He tells them that he was teaching yoga to Bondita and asked her to wear boys clothes purposely. He tells Trilochan that he does everything for some reason. He gets into a heated argument with the Pandit. Trilochan feels ashamed that Anirudh is putting the family respect at stake for the sake of his wife. He fumes at Anirudh. Anirudh protects Bondita from Trilochan’s biasing.

Reviewed Rating for this particular episode Barister Babu Anirudh loud defense for Bondita: 3/5
This rating is solely based on the opinion of the writer. You may post your take on the show in the comment section below.