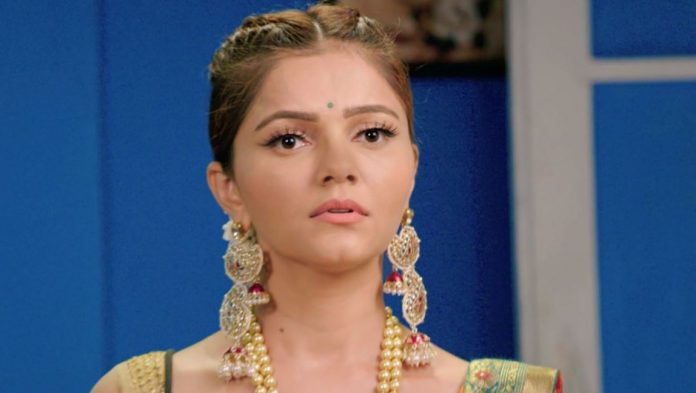 Shakti Tonight Rohan meets Soumya Heer puzzled Saaya informs Soumya that she will support her always. Soumya goes to meet Heer once again. Heer is restless and waits for Soumya. She thinks if it was really Soumya, then she would come back to explain her again. Rohan keeps an eye as well to see if Heer is saying the truth, if Soumya will really come. Heer waits for Soumya all the night, but doesn’t get to see her.

Rohan takes care of Heer. Rohan tells Preeto that he also wants to meet Soumya if she comes. He gets emotional. Preeto tells him that even she wants to talk to Soumya, but doesn’t think she will come so late. Soumya arrives there, hiding behind the stack of gifts. Preeto asks Rohan to go and sleep, and stop waiting Soumya’s arrival. Preeto goes to her room, while Soumya finds a way to leave another note for Heer. She attaches the note to the gifts. Rohan finally catches Soumya. He gets surprised to see her.

Rohan shows Soumya’s gifts and note for Heer. The entire family witnesses the moment. Heer reads Soumya’s emotional letter. Soumya writes that Heer has chosen Virat over her, which means that Heer doesn’t want her to return. Heer tells them that Soumya can’t emotionally blackmail her. Rohan shows the gifts and makes Heer know that its really Soumya who sent the note. Soham wants Soumya to come in front of them instead playing such games. Rohan tells that he had seen Soumya himself. Heer doesn’t believe him. The gifts remind her the childhood moments. She gets emotional.

Parmeet informs Preeto that she has sent a mehendi artist for Heer. She tries to insult Preeto by commenting on their class. Preeto doesn’t know about the mehendi artist coming home, if she is Soumya is disguise. She wishes that a miracle happens and the marriage stops. She asks Heer to go with the henna artist for Parmeet’s sake. She asks the lady to apply the latest designs. Soham asks Heer to get the mehendi applied, while he does her work.

Heer sits for the mehendi. Rohan and Soham cherish the moments with Soumya on seeing the gifts. They recall Heer’s childhood. Heer overhears them and gets sad. The henna artist makes a leave. The real artist comes there asking for the bride. Heer realizes that the henna artist was Soumya in disguise. She runs after her to stop, but just gets her anklet.

Rohan tells her that Soumya has left from the backyard gate. Heer wishes that she could meet Soumya. She breaks down. She doesn’t want Soumya to break her marriage. She wants to know why is Soumya helpless to hide. Saaya meets Heer and agrees to tell the truth about Soumya. She tells Heer that Preeto made Soumya leave the house and bounded her by the promise. She tells how Soumya had sacrificed her happiness for Heer’s sake. Heer gets shattered to know Soumya’s sacrifice. She meets Virat and shares about Soumya’s visit. Virat finds her troubled and promises to find Soumya to get Heer at peace. Virat and Heer look for Soumya. Will they find Soumya or is it Preeto’s conspiracy to stop Heer’s marriage? Keep reading.

Reviewed Rating for this particular episode Shakti Tonight Rohan meets Soumya Heer puzzled 13th July 2020: 4/5
This rating is solely based on the opinion of the writer. You may post your take on the show in the comment section below.