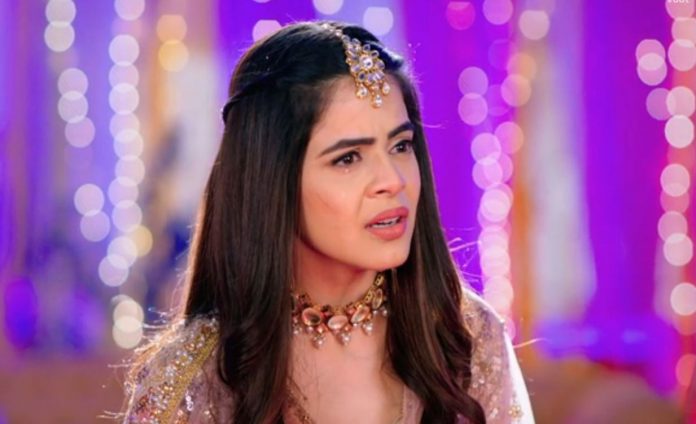 Colors Shakti 14th July 2020 Heer breaks off the marriage Nutan asks the kinners to inform her if they find Soumya. She wants to stop Soumya from meeting Heer and stopping the marriage. Preeto doesn’t want Nutan to pose problems for Soumya. She attacks Nutan and makes her away. The entire family misses Soumya. The children want their Gulabo out. Rohan asks Heer how did she forget that Soumya loves her a lot. Heer tells him that she can give her life for Soumya. She wants to meet Soumya once.

She thinks Soumya didn’t return, she can’t be helpless to hide her identity. She suspects that someone is behind this and the truth is something else. She wants Soumya to come out if she knows everything about her. Soumya stays away and hides. Saaya arrives with the truth. She tells Heer that she can tell her about Soumya’s reason. She wants Heer to promise that she won’t get married if she finds Soumya’s sacrifice a big one.

Preeto doesn’t want her to interfere in the family matter. Saaya tells her that the matter is connected to her, since she is like Soumya’s mother. Heer wants to know the truth. Harak tells Saaya that they will sort the matter themselves. He wants her to leave. Heer asks them to let Saaya tell the truth. She threatens to hurt herself by burning her hand if they hide the truth. Saaya wants her to first promise that she will not go for the marriage. Heer doesn’t want anyone to stop her from learning the truth.

Harak and Preeto worry that Saaya will tell the identity truth to Heer. Harak feels a heart ache. Preeto rushes to stop Heer. She tells that she has done a lot to protect her from the world. Saaya tells Heer that Soumya didn’t leave the house by her wish, Preeto had compelled Soumya to leave for Heer’s betterment. She reveals how Preeto made Soumya leave Heer forever. She tells that Soumya would never come back until Preeto calls her, Soumya left because of Preeto and Harak. Heer can’t believe this. Harak tells Heer that they have taken that decision for her side.

Parmeet wants them to talk in front of the family. Heer tells Virat that she can’t marry him. Virat receives a big shock. Virat runs after Heer to stop her and get an answer. Heer tells him that she can do anything for Soumya, she loves Soumya a lot, its Soumya’s wish that the marriage doesn’t happen. Virat tells her that Soumya isn’t with them. He apologizes to him. Parmeet feels Heer has finally taken the right step. Virat loves Heer a lot and doesn’t want her to go anywhere. Heer hugs him and sheds tears.