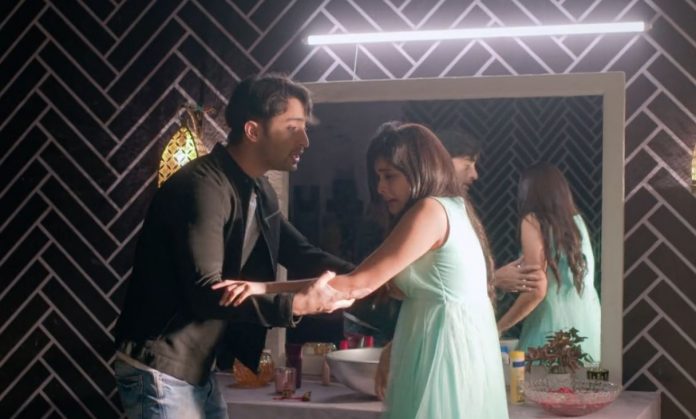 Rishtey Pyaar Accident visuals disturb Mishti Odd twists Parul wishes Meenakshi on her birthday, while the latter misses her son badly. Meenakshi wishes that Abir comes back home soon. She thinks Mishti has snatched her son forever. Her hopes begin to shatter. Meenakshi and Abir’s relation is better known to Parul. Parul understands Meenakshi’s sorrow. She cheers her up by taking about Kunal.

She tells that Kunal wished Meenakshi and wanted to wish her first. Meenakshi knows that Kunal will never go away from her, he is her devoted son. She still wants Abir back. Meenakshi and Parul soon get a surprise in the form of Abir’s arrival. Mishti gets Abir home for the sake of his happiness. She knows that he wanted to be with his mother on the birthday occasion. She thinks to control her fears for his sake. Abir and Mishti meet the family and bring a big wave of happiness around. Meenakshi can’t ask for anything better.

Abir tells her that he was planning to surprise them and didn’t inform about his coming before. Meenakshi believes him. She didn’t know that Mishti is having a problem due to the past incident. Meenakshi heartily welcomes her son. Mishti brings a cake for Meenakshi and doubles her smile. Meenakshi prepares to cut the cake. Mishti suddenly gets the panic attack, when a popper triggers her fears again. Mishti screams and runs away, making everyone think the reason for her behavior. Abir tries hard to cover up Mishti’s secret.

Meenakshi misunderstands Mishti when the latter spoils her precious moment. Kuhu further fuels the fire that Mishti is an attention seeker and did everything intentionally to take Abir away. Kuhu also turns upset on Mishti. Abir rushes to Mishti, who shatters. Abir consoles her and promises to always support her. He tells her that nothing will go wrong. The police arrives there to meet Mishti. Abir and Mishti gets wrong hint. Mishti feels guilty and thinks to surrender to the police. Abir stops her, but Kuhu brings her in front of the police.

Abir rebukes Kuhu for bringing Mishti and putting her in trouble. Kuhu feels Abir has changed a lot. She doesn’t know the reason. Mishti learns that the police has come to return her lost wallet. Meenakshi wants to know the odd thing Abir is hiding. Abir clears the matter. He doesn’t feel its needed to tell them anything until the matter is in control. Kuhu complains to Jasmeet about Mishti’s attention seeking behavior. Jasmeet asks her not to leave the house and stay firm there to win hearts. She tells that Mishti won’t be actively participating in Ketki’s marriage functions and its time that Kuhu proves her worth.

Kuhu agrees with Jasmeet’s advice. Mishti apologizes to Abir for spoiling his moment with Meenakshi. Abir tells her that she matters the most to him. He arranges a surprise for Mishti again. He tries hard to get her at peace. Meenakshi prepares the breakfast for them on Parul’s suggestion. She wishes Abir to dine with them, but Mishti faces an odd moment again when she sees red colour. Mishti shouts to Abir. He fails to spend time with Meenakshi, leaving her depressed.

He gets rude towards Kuhu, who taunts Mishti in a mean way. Abir shoulders a dejected Mishti. He tells her about the red sindoor. Mishti gets visuals of the accident committed by her. Abir wants her to stay connected with him and gives her hopes. Mishti feels sorry to ruin his happiness. Mishti’s secret will be coming out. Mishti and Kuhu’s fight will be next, while Abir saves Mishti from an accident.

Reviewed Rating for this particular episode Rishtey Pyaar Accident visuals disturb Mishti Odd twists 14th July 2020: 4/5
This rating is solely based on the opinion of the writer. You may post your take on the show in the comment section below.