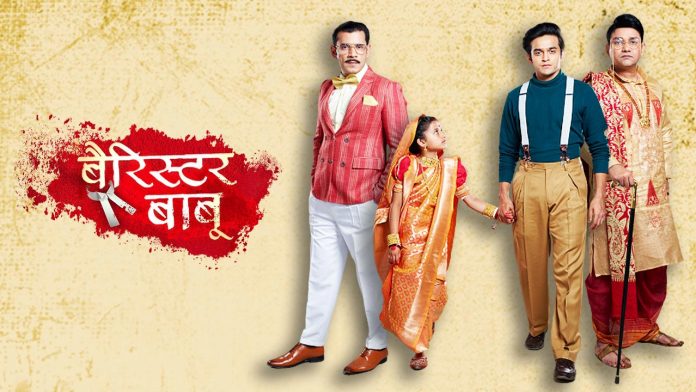 Barrister Babu Anirudh against Trilochan 15th July 2020 Bondita gets hyper when Anirudh stops her from drinking water when she feels a burning sensation. She tells him that she has stopped eating sweets and left all her choices just on his saying. She feels that her problem doesn’t have any solution, his plans have failed. He explains that everything needs time, change happens but her body needs time to adapt.

He asks her to think if she was born the way she is now. He tells that she was a little baby and now she is grown up but she has to wait until her problem gets solved. He doesn’t want her to expect a miracle. She doesn’t think they have time left. Trilochan doesn’t want any problem in the Mahapuja, else the Brahmans will curse his family. He thinks of a perfect solution to send away Bondita. Bondita suggests Anirudh to do any miracle, but solve her problem. Anirudh knows that they just have three days now and they should solve the problem before the Puja.

Bondita tells that she feels ashamed and also hurt after seeing the family upset. She doesn’t want Trilochan to scold Anirudh. She asks him to send her back to her mum’s place. Saudamini thinks she is right this time and supports her. She tells Anirudh that Bondita is right, they are helpless, since they have no solution for Bondita’s problem.

He doesn’t give up. He tells her that he will find a good solution. Trilochan figures out a solution and invites a tantric home. Anirudh thinks to get medical help for Bondita. Trilochan and Binoy learn that Anirudh was speaking to a doctor, he isn’t well. Trilochan holds Bondita responsible for this. Binoy cares for his son. Trilochan and Binoy get after Anirudh’s care.

Anirudh tells that he is not unwell, he was contacting the doctor to get Bondita cured. Trilochan doesn’t want the news to spread. Saudamini tells Bondita that once she goes to a doctor, the entire city will know her problem. She scares her about the medical procedure. She asks her to explain Anirudh that her mum can solve her problem. Bondita misses her mum. She agrees with Saudamini. Trilochan reprimands Anirudh for defaming them by making Bondita’s problem public.

He feels that Anirudh will send them to hell, after Mahapandit curses them on failing to organize the Puja. Anirudh argues with them for not understanding the right thing. He decides that Bondita will go to the doctor, since he doesn’t care for the people’s opinion. He has no objection if any male doctor treats Bondita. The family objects to Anirudh. Anirudh wants them to have a broad thinking. Binoy tells that women don’t go to male doctors and try home remedies for their problems. Anirudh tells that his decision won’t change. Trilochan declares that he will stop Anirudh from initiating this revolution.

Bondita thinks Trilochan will stop Anirudh for sure. Saudamini tells her that Anirudh is much stubborn. Trilochan makes Bondita meet the tantric. He thinks the tantra-mantra can solve her problem. Bondita wants her problem to end so that her family gets at peace. She gets tired of their solutions. The tantric treats her. Bihari stops Anirudh from reaching there. He lies to Anirudh about Trilochan. Anirudh suspects that something is wrong. The tantric fools Trilochan that Bondita is possessed by an evil spirit. Bondita gets puzzled. Trilochan asks Bondita to give the Agni pariksha as the tantric guides her. Will Anirudh find out Trilochan’s next plan? Keep reading.

Reviewed Rating for this particular episode Barrister Babu Anirudh against Trilochan 15th July 2020: 5/5
This rating is solely based on the opinion of the writer. You may post your take on the show in the comment section below.