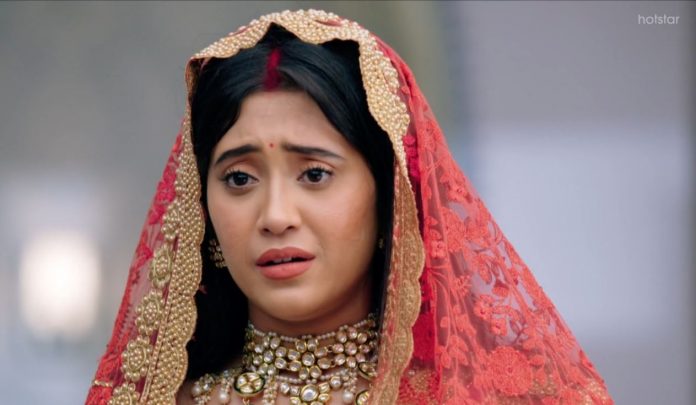 Yeh Rishta Upcoming today Naira twin trouble 17th July Naira gets worried when Sita demands to see Naira and Tina together. Naira rushes to her room and finds ways to fool Sita. Kartik gets an idea and makes Naira play a double role verbally. He tells her that Sita will be convinced on hearing dual voices. Sita gets surprised when she hears Naira and Tina arguing. She can’t believe that the twins exist. She still thinks its not true and she should dig more into the matter. Naira makes Kartik play her voice recording.

Kartik plays the recording of Naira’s bidaai, when she was crying a lot. They use the recording in their favor. She asks Kartik to text Surekha and inform their plan. Kartik messages Surekha and asks her to come to his room. Surekha makes excuses that she will go and prepare tea. She rushes away from Sita. Naira feels guilty to lie to Sita and cheat her. Kartik tells her that he has always explained her that cheating someone for their benefit is wrong.

He leaves the decision on her if she wants to tell the truth to Sita. Naira then sticks to her decision knowing the staff needs their help. She takes the matter in her hands again for the sake of helping many families. Dadi also tells Naira that though the task is tough, but she has taken the decision for other’s betterment. She calls Naira selfless and is proud of her. She wants Naira to complete the drama until they achieve what they want. She tells that they should not leave the act midway, else they will lose everything. Manish realizes Naira’s plans.

He knows that Naira won’t be able to come in front of Sita in her traditional avatar. He tries to get Sita with him. Sita gets adamant that she will see both the twins together. She doesn’t move from the door. Naira takes the drama to the next level. The fake argument between the sisters go on. Manish tells Sita that they don’t like Tina coming home since Naira always gets hurt after the fights. He tells Sita that they should leave the matter to the sisters and let them sort it out. He asks Sita not to interfere.

Sita doesn’t get convinced that Naira and Tina are twins. Surekha makes a timely entry in Naira’s room and takes Naira’s place, donning her clothes. Sita finds Tina arguing with Naira, who is sobbing a lot. She thinks there is really some truth in the story. Tina tells them that she can’t tolerate Goenkas further and makes a leave. Sita thinks to meet Naira after Tina left. She finds Naira crying, unaware that Surekha is in Naira’s place. Naira goes back to her room to dress up in traditional avatar.

She asks Kartik to just assist her so that she can hurry, knowing Sita is at the door. Sita waits for Naira. Kartik and his family help Naira a lot and cover up her absence for a while. Sita finally gets to see Naira. After many difficulties, Naira takes her avatar. Kartik signals her about a flaw, which can be caught by Sita. He doesn’t want the plan to fail, since Naira will be scolded again. Naira and Kartik manage to cook up more lies and convince Sita. Kartik and Manish ask Sita to sign the loan papers.

Sita postpones the deal until her lawyer comes to Udaipur. Naira asks Kartik to have patience since they have come a long way. She tells him that Sita will agree to help them. Sita apologizes to Naira for suspecting her. Goenkas lie to her about Tina further. Sita shocks them by asking for Tina’s number. Naira asks the reason. Sita tells that she wants to direct Tina’s energy and talent to reap something good. She tells that she wants to give a job to Tina. Naira gets in trouble once again with Sita’s new move.

She wishes that Sita stops looking into their lives. Sita gets more involved in Goenka family. She feels some strange connection of past birth with Naira, who is just her replica. She connects with Naira. She tells them that she sees herself in Naira, which really means a lot to her. Naira unknowingly plays with her emotions. How will Naira manage the double role trouble? Keep reading.

Reviewed Rating for this particular episode Yeh Rishta Upcoming today Naira twin trouble 17th July: 4/5
This rating is solely based on the opinion of the writer.