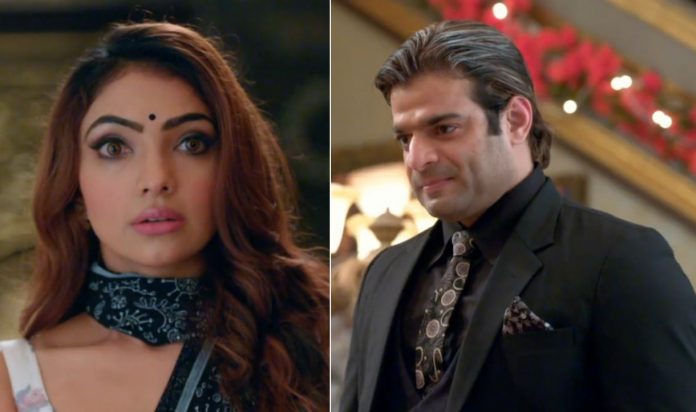 Kasautii Tonight Nivedita Bajaj Prerna crazy love triangle 20th July 2020 A not so common love triangle will soon begin. It will be shocking to know that Nivedita will get after Mr. Bajaj, and try to outdo Prerna. Nivedita gets frustrated by her life’s lows and thinks to marry someone rich. She doesn’t know that Mr. Bajaj is much dedicated towards Prerna and not let anyone enter his life. Nivedita’s mad decision is seen in the show’s preview.

Coming to today’s episode, Komolika rages at Basu family when she fails to see Anurag in the house. She wants an answer about Anurag’s madness to help Prerna in getting the land permissions. She asks Mohini how can Anurag do this to ruin himself, their Basu city plan is gone because of Prerna’s inception of Bajaj city plan. She tells them that Prerna will now get the profits, all thanks to Anurag’s kindness. Mohini doesn’t think that Anurag will do anything against the family. She knows that he can’t cheat them.

Komolika knows that he can do anything for his love and Prerna is still in his heart. She tells them that they can’t get profits from their mall now. She is much frustrated to know about Prerna’s big achievement. Moloy finds a chance to pull her leg and laughs on her defeat. Komolika spares him since he is a heart patient. She asks Mohini to keep her husband away from the business matters. Moloy wants to answer Komolika and anger her, since she always disrespects his wife and daughter. He tells Mohini that its his way to give it back to Komolika.

Nivedita wants to know the truth from Anurag. Anurag gets away from the home. He tells Kaushik that he is feeling light and happy after a long time, since he has done something to irritate Komolika. Mohini vents her frustration over Prerna and Bajaj’s amazing bonding. She feels Veena is really lucky to get a super rich Bajaj in their family. She wishes that Nivedita never made the mistake to marry Anupam. Nivedita feels bad that she always bears the taunts, due to Komolika. On the other side, Bajaj shows his total faith in Prerna’s decision.

Prerna decides to sell the flats at a less price so that the bookings happen soon and Anurag’s Basu city plan sinks down. She sees the profits coming later, while the manager doubts that her decision will bring the loss. Bajaj asks the manager to just obey Prerna and not do anything against her decision. He is sure that she is sharp-minded in business and seeing her goals fulfilled. Komolika calls up Prerna to know her further plans.

She accuses Prerna for taking help from Anurag for her business. Prerna doesn’t want to tell her anything about the next plans. She asks Komolika to meet her in the inauguration party and talk to her directly. She invites Komolika and Basu family in the party. Komolika goes mad in anger, finding Prerna happy and successful. Anurag tells Kaushik that he has done wrong to marry Komolika, it was his wish, still he was forced to do it. He was stuck in a helpless situation. Kaushik doesn’t understand his words. He asks Anurag to just keep smiling, since he looks happy after a very long time.

Anurag asks him to learn the lessons taught by life, since life teaches everything at the right time. He drops Kaushik at his college. Kuki gets emotional that her dad doesn’t love her and doesn’t spend time. She feels that just Prerna is the only one that makes her life perfect. She tells her friend that her life isn’t completely perfect because of her dad’s strange behavior.

Kaushik reaches there and sees her in tears. He distracts her by flirting with her. He makes a plan to mislead her that he likes her. Kuki doesn’t want Kaushik to get interested in her. Her friend likes Kaushik’s hot looks. Kuki thinks otherwise. Kaushik tells his friend that he isn’t interested in Kuki, who is just an ordinary girl, his lover would be someone rocking. He just plans to fool Kuki and turn her jealous. Later, Anurag reaches the office and finds Komolika waiting for him. He reacts unexpected when she tells about Prerna’s achievement.

He wants Prerna to always win. She tells him about Prerna’s invite. She tells him that they will be attending Prerna’s party. She plans to make the party memorable for Prerna by her solid conspiracy. She thinks to ruin the happy moment and put Prerna into fear. She conceals her planning. Anurag and family reach Bajaj mansion for the party. Kaushik meets Kuki and gets into a cute moment with her. Prerna plans to shock Anurag by donning the bridal saree to remind him the big deceive. She thinks to ruin Anurag by snatching everything from him. She wants to leave him empty-handed so that he cries on his fate.

She looks ahead to enjoy the moment of Anurag’s defeat. Prerna and Bajaj welcome the guests. Mohini gets jealous of Veena, seeing her enjoy a lavish life at Bajaj mansion. Veena taunts her about Anurag and Nivedita’s wrong choices in life. She tells that Anurag could have got someone better than Komolika, and pities on Nivedita who had ruined her life with her own hands by marrying a poor guy. Veena gives it back to Mohini.

Nivedita gets blasted by Mohini again. She doesn’t want Komolika to humiliate her like a servant. She really wishes that her husband was someone rich like Bajaj. She tells Mohini that she has decided to marry a rich guy, that’s none other than Mr. Bajaj. Mohini gets too shocked to know her decision and finds it impossible.

Reviewed Rating for this particular episode Kasautii Tonight Nivedita Bajaj Prerna crazy love triangle: 4/5
This rating is solely based on the opinion of the writer. You may post your take on the show in the comment section below.