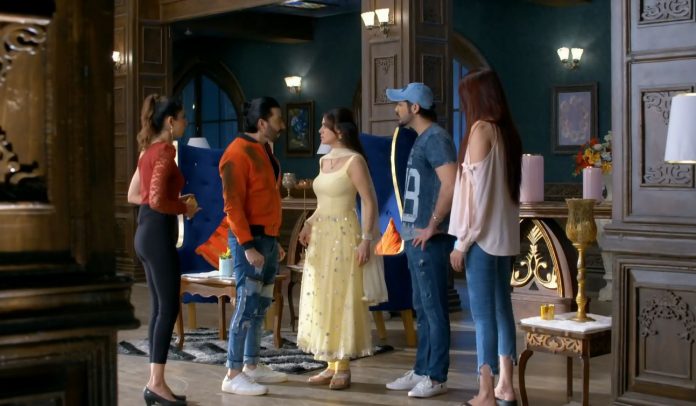 Kundali Bhagya 20th July Preview Shocking revelation Shrishti tells Preeta that she also suspects Prithvi. Preeta doesn’t want to trust Karan. She asks her not to support Karan. Sameer asks the reason for Karan’s doubt. Preeta tells that the kidnapper praised her intelligence and called Karan foolish, that’s why Karan doubted that the kidnapper is Prithvi. Sherlyn overhears them. Preeta tells that they will find Rishabh. Sherlyn thinks to leave after some time.

Mahira looks for Sherlyn. Shrishti doesn’t see Mahira. Mahira apologizes the man for the confusion of room number. Prithvi takes Rishabh with him. He hides him from Preeta. He doesn’t want Preeta to know his evil truth. Preeta calls Prithvi. He gets saved since his phone is on silent. He doesn’t answer the call. Preeta tells that she wants to ask Prithvi where he is, she will see him on video call, Karan had blamed him that he is the kidnapper.

Prithvi feels sorry to ignore her calls. He is glad to know that she blindly trusts him. He scolds manager for not doing his work. Manager asks him why is he getting hyper as if he is doing something illegal. He leaves when his shift gets over. Mahira reaches the room and meets Sherlyn. She asks what is she hiding. Sherlyn lies to her. Mahira wants to know what’s the truth. She gets angry when Sherlyn gets silent. She tells that she is suspecting that Sherlyn is the mastermind of the crime, she got Rishabh kidnapped.

She asks why is she doing this kidnapping drama on her marriage day. Sherlyn tells her that her lover is the kidnapper. She doesn’t want to tell anything more. Mahira tells her that she wants to marry Karan, she can lose him and get her life ruined. Sherlyn promises to fix things for her. She tells that even Karan got kidnapped. Mahira can’t believe this. She asks Sherlyn to leave Karan free. She tells that she can save Karan and impress him, his heart will melt for her and Preeta will be out. She asks Mahira to save Karan. She rushes to save Prithvi. Mahira wants her help. Mahira unlocks the door and reaches Karan. She frees him from the ropes.

Karan asks her how did she come. Mahira tells that she has come to save his life. He thanks her. Rana attacks her. Karan saves her life and fights Rana. He wants to know about Rishabh. Mahira tells that she has saved him, but doesn’t know Rishabh. He follows Rana. Prithvi thinks Rana will not let Karan free. He wants to confirm it once. He calls Rana. Karan gets Rana’s phone. Rana takes his phone and runs away. Karan learns that Rakhi is looking for him. Karan goes to pacify Rakhi. Prithvi wants Rana to inform him about Karan. Rana calls him and gets scolded. Rana tells him that a girl has saved Karan. Prithvi thinks Preeta has saved Karan.

He asks Rana to come and help him in shifting Rishabh. Rana asks him to be alert of Karan. Karan meets Preeta, Sameer and Shrishti. He asks if they found Rishabh. Preeta tells that they didn’t find him yet. Karan and Preeta get into an argument. They see Mahira. Mahira tells that she has saved Karan. Karan complains about Preeta, who took revenge on him and tied him. Preeta tells that Karan was troubling her by his nonsense talks. Their kiddish fights go on.

Reviewed Rating for this particular episode Kundali Bhagya 20th July Preview Shocking revelation: 4/5
This rating is solely based on the opinion of the writer. You may post your take on the show in the comment section below.