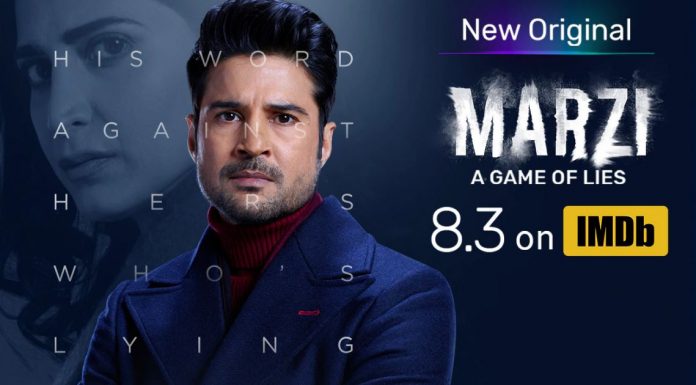 Marzi Finale Episode 6 The collision course Anurag reaches home in an injured state. Ayaan asks him the matter. Anurag tells him that Rashmi is also supporting Sameera, she is finding evidences against him, she is also blaming him for the rape. Ayaan asks him to appeal to Rashmi’s seniors. Anurag tries to get Ayaan on his side. He asks Ayaan to help him by lying to the cops. Ayaan asks if he should lie. Anurag tells him that its true but needs the support of his lie.

He asks Ayaan to think that the police will arrest him and take him away. He sheds crocodile tears. He plays an emotional drama. He asks Ayaan to go away to Shashi’s house. He wants to deal the problems alone. Ayaan is ready to support him. Rashmi drops Sameera home and tells her that criminal can’t get saved. She wants Sameera to trust her. Anurag gets confronted by the police. After three months, Sameera happens to meet Kabir. She feels happy and cherishes the moment. They spend some moments of peace. Isha wants Shaan to forgive her for Tia’s sake.

Shaan makes his choice clear. He doesn’t want Isha to come back home. Isha tells him that Tia needs both of them. He feels he also needed Isha and now changed his needs. She misses her home and cries. Sameera and Kabir find Anurag at the cafe. Anurag meets a lady. Kabir asks Sameera if she knows him. He identifies Anurag. He asks if Anurag is still free. Sameera tells him that Anurag didn’t left a clue. She realizes that anger can’t help anyone, but anger gets the person punished. She loses her courage. Kabir feels bad for her.

Anurag flirts with the lady. He invites the lady home for dinner. She accepts his invitation. He finds his next target. Sameera learns about Anurag’s new relationship. She meets the lady Charu, who tells her that Anurag already told her about his past. Sameera tells Charu that its the truth, Anurag has ruined many lives. Charu doesn’t believe her. Sameera tells that Anurag likes to control strong women. She advises Charu to save herself.

Charu calls up Anurag to tell him about Sameera’s advice. Rashmi meets her husband Ajay. She gets emotional that he is leaving for his duty. She tells the terrible truth to him. She tells that Anurag had drugged her and raped her. Ajay wants Anurag to get punished. Anurag calls Sameera to trouble her again. His disturbing talk breaks her down. Sameera rushes to meet Rashmi. She wishes that Anurag dies soon. Rashmi asks her to stay away from Anurag. She wants to wait for his mistake. She tells that their patience will go waste if she makes any mistake.

Sameera tells Rashmi that Anurag has recorded them, since he has admitted it to her on the call. Rashmi tells that the police didn’t find any evidence at his place. Rashmi meets Charu, who is also a police officer. She tells her about Sameera’s latest findings. Charu tells that she had provoked Anurag to make a mistake. Rashmi asks her to plan something soon. Charu tells that she is going for dinner at Anurag’s place. She wants to nab Anurag red-handed. Isha gets a phone from the hospital locker. She meets Sameera.

She hands over the phone to her. She wants Sameera to forgive her. She asks Sameera not to get after Anurag again, else she won’t be able to move on. Sameera doesn’t give up. She misses Sameera and tries to melt her heart. Sameera tells her that she doesn’t hate her, but can’t trust her now. Anurag gets the drugs and prepares a drink for Charu. She is also prepared to catch his game of lies. He tells her that his phone got stolen from the locker. She compliments him for having a lovely house. He offers her drinks. She asks him for water. She sends him away and collects the sample of the drink. Anurag witnesses her move. He turns alert.

He confronts her about the plans. She warns him to stay away. He asks her if she is scared. She tells him that police will reach his house if he stops her. Anurag tells her that there is no use, since he didn’t spike her drink. She leaves from his house in rage. Her plan fails. Sameera calls Nitin for a talk. She regrets that his suspension got extended for three months. He tries to find the proof from Anurag’s phone. He unlocks the phone. Sameera realizes that Anurag’s phone doesn’t have anything. She tells him that she suspects Anurag to store the videos. Nitin can’t believe it. Rashmi gets upset that Charu failed to catch Anurag.

Ajay asks Rashmi not to stress herself. Nitin finds Laxmi’s message for Anurag on his phone. He asks her about Laxmi. Sameera gets the address and phone number. She calls up Laxmi. Nitin makes an apology to her about Isha and his relationship. Sameera reaches the address to meet Laxmi. She lies that she is Anurag’s friend. She meets Anurag’s mother. She tells that Anurag has sent her to pick his stuff. Laxmi takes her to Anurag’s storeroom. Sameera checks the storeroom for the evidences. She gets the drug bottles.

She also discovers the memory cards. Sameera finds enough evidences against him. Laxmi calls Anurag to inform him. She fails to contact him. Sameera tells Laxmi that she got the stuff she wanted. Laxmi calls on his landline. Anurag can’t believe Sameera’s daringness. Sameera checks the videos. She realizes that Anurag is really sick-minded. Sameera goes to the police station to meet Rashmi. She wants t hand over the evidences soon. She meets inspector Subodh. He apologizes for not being on duty. She asks him if he has seen the recording. She tells him that she couldn’t see it.

He tells her that Anurag will be soon punished, since the magistrate has also seen the recordings. He informs her that the police left to arrest Anurag. Sameera feels happy that everything is over and she finally got the justice. The police reaches Anurag’s house to arrest him. Ayaan tells them that Anurag is at home. He learns that police has come to arrest him. Anurag flees from the house. Anurag gets defamed by the media. Anurag is found dead at some lakeside. None knows who had killed him. The season ends with Anurag’s death, Sameera winning the justice for herself and other victims.

Reviewed Rating for this particular episode Marzi Finale Episode 6 The collision course: 4/5
This rating is solely based on the opinion of the writer. You may post your take on the show in the comment section below.