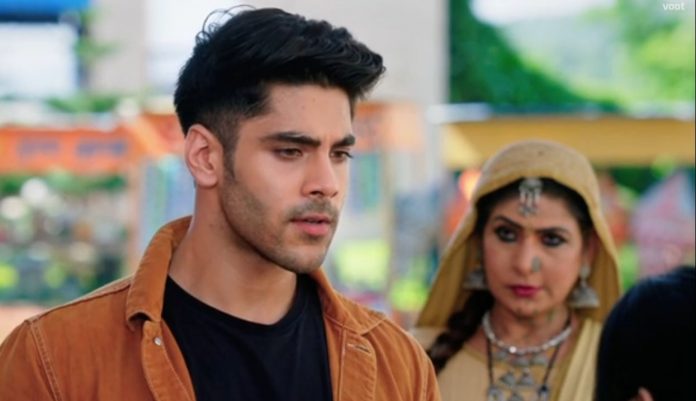 Shakti Virat’s hatred provokes Heer for suicide 22nd July Preeto proves to Virat that Heer is a kinner, like Soumya. She tells that Harman kept fighting for Soumya all his life, till his death. She doesn’t want the same to happen with Virat. She begs him to not marry Heer. Virat recalls his love for Heer. He can’t believe that he madly loves a kinner. Virat tells them that Heer has cheated him, every moment spent with her was a deceive. Preeto tells him that Heer didn’t cheat him, Heer isn’t aware of her identity truth.

She defends Heer. Virat asks why did Heer act to love him when she couldn’t have a future with him. Harak tells him that Heer is his blood, she has a clean heart, she can’t lie or cheat anyone. Virat can’t believe that they have hidden the truth from Heer as well. He asks if its a joke that the kinner doesn’t know her truth herself. Harak tells them that they have always kept her protected from the outside world, her brothers didn’t let her talk to anyone, they were always with her in the college, Heer didn’t know anything about herself.

They just wanted her to study well and get independent so that she makes her future. Harak tells him that they have seen hell in their lives because of Soumya, who is responsible for Harman’s death. Harak tells that he isn’t responsible for ruining Heer’s life, she is a curse on the family, but they love Heer a lot. He tells that they protected Heer from the society. Virat asks them how could they keep a kinner at home. He finds them disgusting. He hates them. He is thankful that they saved his life from getting ruined. He hates himself for loving a kinner.

He criticizes Heer. He thinks he is a big fool to drink poison for a kinner. Preeto tells Harak that Virat isn’t like Harman, he doesn’t love Heer. Harak tells Preeto that there can’t be anyone like Harman. Preeto asks Virat to forget Heer and them. She apologizes to him. She requests him to not tell Heer’s truth to anyone. Harak tells Virat that he should make Heer hate her, he should break her heart and make her away from himself. He tells him to reveal Soumya’s truth that she is a kinner. He wants Virat to do the last favor.

Virat doesn’t agree to cheat Heer. He wants to tell the world that Heer is a kinner, so that no kinner crosses limits and traps a normal guy in love. He feels they should get punished for cheating the society. Preeto reveals everything to Rohan and family. Rohan tells them that they should go and save Heer. Preeto doesn’t think that Virat will tell the truth to anyone, Heer would be safe, but she will have her heart broken. She tells them that Harak has already threatened Virat.

She tells that Harak and she had scared Virat for his life, now he will not reveal Heer’s truth. When Virat didn’t get scared, then they threatened to kill themselves. Nutan feels sorry that Virat broke all his promises on knowing Heer’s truth, he actually loved Heer’s beauty. Saaya tells them that Virat can’t become Harman, who didn’t let Soumya feel that she is a kinner. Virat admits that he isn’t mad like Harman, he can’t love Heer.

Saaya reminds him that he was going to marry Heer. She asks him to keep his love and protect her from the truth, she shouldn’t know her identity. She begs him to spare Heer’s life. She knows that Heer won’t be able to live if she knows the truth. Virat agrees to them. He ends all his ties with them. Preeto tells Rohan that Heer should know Virat’s decision from himself. Virat goes home angrily and calls off the marriage. He tells Parmeet that he doesn’t want to marry Heer. Sant Baksh asks him the reason for refusing. Virat apologizes to them. He swears on Parmeet. He tells them that he doesn’t want to marry Heer.

They get shocked by his decision. Sant gets glad that Harak’s family will suffer when Virat doesn’t take the baraat there. He dances happily. Virat gets angered when Heer’s memories trouble him. He feels hatred for himself. He didn’t know that he was in love with a kinner. He cries on his fate. He conceals the truth from everyone. He hurts himself to get rid of Heer’s memories. Ahead in the show, Virat expresses his hatred for Heer and reveals that Soumya is a kinner. Heer gets heartbroken and runs to the temple, where she tries to commit suicide. Can her family save her from the suicide? Keep reading.

Reviewed Rating for this particular episode Shakti Virat’s hatred provokes Heer for suicide 22nd July: 3/5
This rating is solely based on the opinion of the writer. You may post your take on the show in the comment section below.