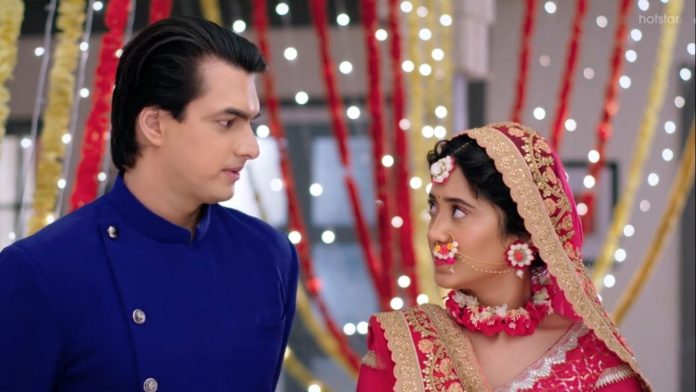 Yeh Rishta Star Plus Preview Kundan to expose Naira’s lie Kartik and Naira get into a romantic mood so that they can have some good memories of the Sawan milni function. Kartik tells her that the function can’t end without their romance. He suggests that they spend time together, but she stays too busy. He tells her that he is not going to skip his plans. He performs dance for her and makes her join. They both have a romantic dance. They also admire each other’s modern avatars. She likes Bhautik more and finds him hot, while he likes Tina more. They know that their love will always stay eternal.

He tells her that they shall sign the deal soon. He asks her to just be careful of her foot injury. Naira packs the gifts for Sita. She wants Sita to feel like home when she is with Goenkas. Sita holds a good impression of Naira. She sings Naira’s praises all the time, whenever she gets a chance. She relates herself with Naira. Naira finds Kundan a little weird by his fake behavior. Kundan plans to harm Sita and stop her from signing Goenkas’ loan deal.

He wants her to get bedridden so that he can head her business his way. He wants to rule on the property and her business as well. He gets wicked and plans her accident in the Goenka mansion so that none doubts on her. Sita and Kundan happen to meet Naksh, who arrives with gifts and sweets for Naira and Goenkas. They ask him about his introduction. Naksh tells them that he is Naira’s brother. They ask him about Tina. Naksh gets close to tell them that Naira is Tina. Kartik gets alert and stops Naksh in the nick of time.

He tells them that Naksh doesn’t like Tina and is against her modern ways, that’s why he doesn’t even like to mention her name as his sister. Kundan doubts on them and thinks they are lying something. Sita gets convinced because of Naira again. Kartik tells them that Naira and Tina are twins, Sita just likes Naira. Naksh understands that he is expected to lie because of Kartik’s plans. He stays careful when he talks to Sita. Sita asks Naira to perform traditional dance. She is impressed by her dance too. Naira tells Sita that she will surely dance to double the celebrations joy. Kartik worries since Naira is much hurt.

Naira manages to perform the dance. Kartik cares for her. Sita likes their bonding. The entire family celebrates Sawan milni by enjoying the swings as part of the rituals. Kundan wants his mother to sit over it swing, since he has already cut the rope. Kundan wants her to fall down and get much hurt. Naira and Kartik have a moment when he cares for her sprained foot. Sita sits on the swing on everyone’s insistence. The rope begins to tear. Naira is shocked to see that. She saves Sita by placing some mattresses underneath.

Kartik tells Sita that Naira had seen it and saved her from the injury. Kundan creates a scene since Naira failed his plan. He shows his fake love for Sita. Sita tells him that she is okay thanks to Naira’s alertness. She doesn’t want to call off the deal. She tells Goenkas that she will sign the deal soon.

Goenkas get happy that they didn’t need to ask him once again. Kundan feels Kartik and Naira are lying and if he exposes their lie, then he can get the deal cancelled. He wants Sita to know the truth and break terms with Goenkas. He instigates Naksh by acting like he knows Tina’s drama. Naksh rushes to inform Kartik that Kundan is threatening to expose his plans. Naira takes care of Sita like her daughter. Sita can’t stop admiring her. Goenkas get to see the magic of their super Bahu Naira.

Kundan makes a plan to expose Kartik and Naira’s huge lie. He proves that Tina doesn’t exist and Naira is playing Tina for the sake of investment. Sita learns the truth. What will Kartik and Naira do? Will they lose the deal or explain the need for the lie to Sita? Keep reading.