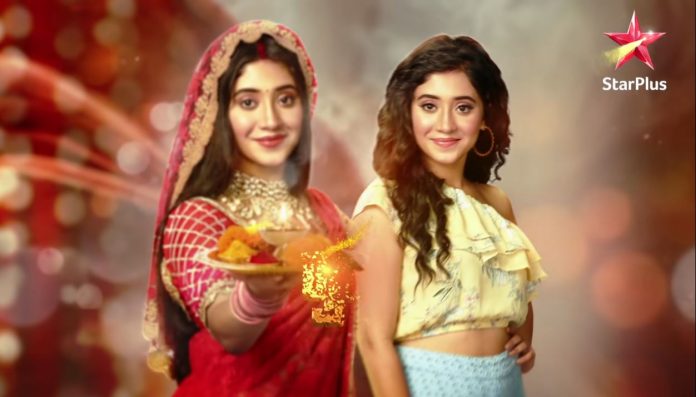 YRKKH Today Spoiler Preview Naira twin role exposed 23rd July 2020 Naksh learns that Kundan is doubting Kartik and Naira’s planning that Naira and Tina is the same. He rushes to Kartik and Naira. He takes them to the room for a talk. He tells them that Kundan knows their truth and was informing someone on the call that he will stop the deal signing by exposing them. He tells them that Kundan will tell the truth to Sita and stop the dealing. He fears the worse. Kartik and Naira ask him not to panic, the truth won’t come out easily, Sita is much convinced by them, she loves Naira a lot and believes Tina as the rebel.

They tell Naksh that Kundan is strange and he keeps talking such weird things. Naksh asks them not to take his warning light. Kartik asks Naksh to enjoy the function. Naira admits that she is helpless to pull on the drama of being twins, Naira and Tina herself for the purpose of getting the loan for Goenkas business. Kundan gets delighted to hear them and record their conversation. He records Naira’s confession that she is Naira and Tina as well.

He rushes to Sita to prove Naira’s lie by showing the video. His excitement makes him commit a blunder. He deletes the video by mistake. He regrets that he lost the proof, but is relieved that the truth isn’t hidden from him. He thinks to find some way so that he can expose Naira’s lie. Dadi, Manish and Akhilesh want Sita to sign the deal soon and end their wait.

Sita wants to dine with them first. Kundan puts a hurdle by asking Sita to invite Tina in the Sawan milni function. He tells them that Tina deserves to be with her family when her brother also joined Goenkas. Naksh tells Kartik that Kundan would be revealing his doubt to Sita. Kartik doesn’t think so. He stays stress free until Sita comes to them and tells them about Kundan’s advice. She tells them that Tina should come to attend the function, maybe she will get a chance to speak to her and convince her for the job again.

Kundan emphasizes that its important that Tina comes. Naira gets stuck in the situation again. Naira doesn’t know what to say. She tells Kundan that she will call Tina if he wants, but she won’t stay back in the function if she comes. She tells Sita that she will go to her room and not come out until Tina leaves. She thinks she can handle the twin avatars this way. Sita agrees to whatever she says. She tells that Naira’s speech is truth for her.

Naira feels sorry to cheat Sita. She thinks to tell the truth once Sita signs the loan deal. Kundan keeps an eye on Naira, while she goes to take Tina’s get up. Sita asks Kartik to go and bring Tina from her home. Kundan wants Sita to see that Naira and Tina are same. He takes her outside the house to welcome Tina. Kartik panics. Naira takes Tina’s get up in time and reaches the gate area. Sita welcomes her and tolerates her drama.

Goenkas act annoyed with Tina. Kartik and Naira succeed to fool Sita again. Kundan plans to expose her and spills the juice on her dress. Naira gets away to clean the dress. Kundan follows her to lock her in the power room. He wants everyone to look for Naira and admit the truth. Kartik looks for Naira everywhere. He wonders where did she go. He informs the family that Naira is not at home. Kundan tells that even Tina is missing. Kartik looks for Naira and finds her locked in the power room. He gets worried when he sees her unconscious.

The family calls her Naira and the truth comes out. They don’t realize that Sita is with them. Kundan succeeds to prove the truth. Sita gets too raged up on knowing Naira’s lie. She blasts at them and ends their business ties. Naira begs her to stop and give her a chance to explain. Naira wants Sita to understand her situation. Sita doesn’t listen to Naira. She feels Goenkas are liars and have no values, since none came up to tell her the truth. She turns disappointed. Can Kartik and Naira convince Sita? Keep reading.

Reviewed Rating for this particular episode YRKKH Today Spoiler Preview Naira twin role exposed 23rd July 2020: 4/5
This rating is solely based on the opinion of the writer. You may post your take on the show in the comment section below.