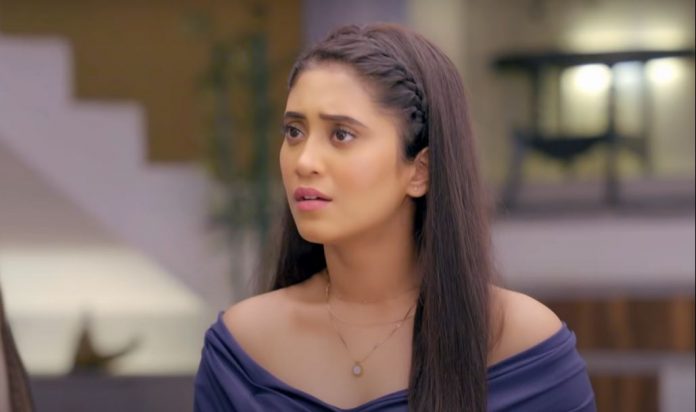 Yeh Rishta Parting twist for Kartik Naira 24th July 2020 Naira falls down on her knees in Sita’s feet to apologize to her. The scene makes Goenkas feel really terrible. They can’t imagine their Bahu falling in someone’s feet for the sake of the loan. Kartik wants to stop Naira, but stays quiet knowing they have done wrong to cheat Sita. Naira asks Sita to punish her, since she is the wrong doer. She doesn’t want her family to get punished for her mistake.

She reveals that she can’t see any poor person in trouble, she has taken the side of the woman at the temple and later realized that she was wrong, by that time Sita came home and identified her. She tells that she was scared to admit the truth since her family was at loss, she had to lie being helpless. She tells Sita that Goenkas company looks after many workers, its not just about their family. She wanted to tell the truth to Sita after the deal got signed. She adds that she lost courage to tell the truth now. She apologizes to Sita earnestly.

Kartik asks Sita to forgive them. Sita tells that she went against her mind and believed Naira. She thinks Naira had cheated her for the sake of money. She tells that Naira broke her trust. She tears the loan documents. She doesn’t think Naira deserves forgiveness. She breaks their ties. Naira blames herself for ruining everything. Kartik tells her that if they were supporting her in the wrong, then they will support her in the right as well, the family unity will help them in surviving the tough phase of their life.

Manish and Dadi also sympathize with Naira. They know Naira’s efforts. They are happy that Naira at least tried. They now hope that Kartik succeeds to get the loan for the company. Kartik knows Naira did everything for their family. He expects the family to be together. The family promises to be together and fight the tough situation. Kundan brainwashes Sita against Goenkas. He tells Sita that they should file a case on Goenkas.

Sita doesn’t want to talk about them. She permits him to decide the deals. Kundan gets happy that he can invest in Chopra’s company. Sita gets disturbed. Kundan wants to exact revenge on Goenkas. Kartik tells Naira that he is going to meet a new investor. She wishes him luck. Kundan finds Kartik convincing the investor. He ruins Kartik’s efforts. He tells the investor about Kartik’s fraud. He tells that Kartik uses his family women for the sake of business, he has no business ethics and family values, he is a big liar.

He asks the investor not to believe Goenkas, who cheated Sita for a loan. Kartik fails to clarify. He gets angry when Kundan speaks ill about Goenkas. He punches his face in anger. Kundan gets more against Kartik. Kartik thinks to find some way to help the family. He thinks the pandemic crisis has ruined the business. Manish tells the family that the entire world is suffering big losses due to the pandemic spread. Its not only about their loss, but of everyone’s loss. He wishes everything to get fine.

Kartik dreams that Goenka house got sealed by the bank. He panics and wants to know where did his family go. He then realizes its just a dream. He promises himself that he won’t let the house get sold. Kundan spreads the news that Goenkas are going to sell the house. Goenkas get calls from the buyers. They clear that they aren’t going to sell the house. Sita and Kundan arrive to threaten Goenkas. Sita tells them that Kartik has hurt her son, she can’t tolerate Kundan’s pain. She promises to ruin their business. She challenges them. She tells that Kartik’s mistake can’t be forgiven, she will teach them a lesson by banning them in the business circle.

She tells them that she will own their house. She asks Kartik to save his house if he can. Kartik gets depressed. The family understands that Kartik didn’t do anything wrong. Kartik gets Sita’s call. He asks Naira to manage everything in his absence. Naira gets disturbed when he tells her that he is going far from her. She gets negative vibes and worries for him.

Reviewed Rating for this particular episode Yeh Rishta Parting twist for Kartik Naira 24th July 2020: 4/5
This rating is solely based on the opinion of the writer. You may post your take on the show in the comment section below.