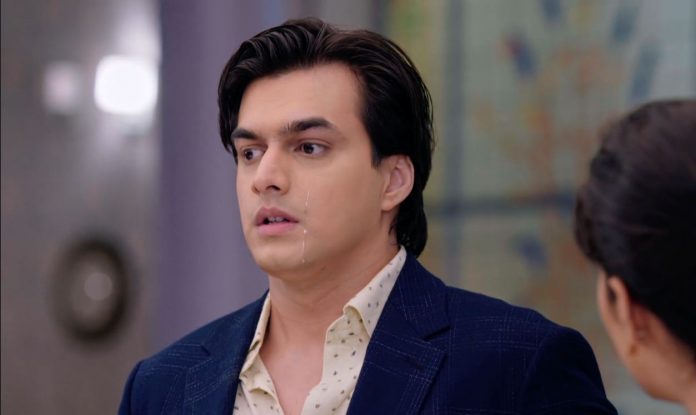 Yeh Rishta 27th July Preview Kartik Goenka gets arrested Naira encourages the family to stay strong and together until they cross the bad phase of their lives. She tells that the testing times will pass soon. The family likes her unique way of motivation. Kartik spends some time with Naira. He also motivates her on finding her getting sad after boosting everyone’s confidence. Sita calls Kartik for an urgent meeting. He gets puzzled.

He tells the family about Sita’s call. Naira wonders why is Sita calling him at her place. Kartik wants to know the reason and heads to meet Sita. Naira tells the family that Kartik will soon return and explain them everything. The family worries for their son. Kartik returns home in a jolly mood and spreads happiness by giving them a good news of Sita approving the loan for Goenkas. The news get a big wave of joy in Goenka family.

They can’t believe that Sita has agreed to give the loan. Kartik tells them that Sita has forgiven Naira and them. The news can’t get better than this. Kartik shows the loan papers signed by Sita. He tells them that they already got the cheque and can start working on their contracts. The family celebrates the news. They ask him to contact Sita and call her home, since they want to thank her enough. They want to invite her for lunch.

Kartik doesn’t invite Sita for lunch and lies to the family. Naira senses that he is hiding something. She tries hard to know the reason unknown to her. Kartik stays away from her knowing she will read his face. He lies to Naira that everything is perfectly fine. Naira wants to meet Sita and get assured herself. He sets up everything for Naira through reminders. He tells her that he will be going away and then she will have to manage her work on her own.

Naira gets angry on him for playing such a prank. He reasons out the work commitments. She wants him to always be with her. Naira and Kartik spend time. He then heads to talk to his son Kairav and instructs him to take care of Naira while he is away. Kartik also spends time with his family with a heavy heart. He makes good memories with them, feeling that its the last day with them. Kartik plans the day with much detailed planning. He plays football with Manish and then a quick game with Goenkas.

He gets emotional and gets into drama mode to express his feelings to them. He tells them that his family is most close to his heart, he can do anything for them, he can even give up his life. He asks the family to know that every problem will first go through him, he will not let them suffer. The family gets emotional on hearing him, but Naira feels terribly negative. She tries to decode the hidden message in his emotional speech. She feels that something is wrong, he is hiding something from the family.

She wants to ask the matter, but Kartik ends the drama on her word. He cheers her up, sings and dances like before to show that everything is normal. She doesn’t want him to act sad again. Kartik and Naira have a romantic moment when he throws a lovely surprise for her. She can’t believe that he is putting many efforts since his work will get doubled soon. She asks him to slow down, they aren’t going anywhere. Kartik expresses his love for her. He tells her that he would always love her a lot, wherever he stays. He proves his love for her.

Naira can’t believe his madness when he stares at her without a blink. She wants to find out the reason for his extreme emotions. Later, Naira finds out that Sita hasn’t met Kartik. She wonders why did he lie to them about Sita and how did he get the loan. Kartik gets panicking that the money didn’t get transferred to Goenkas account. Kartik shouts on the manager and gets the money transfer done. Naira finds his behavior odd. She wants to know the reason.

The Goenkas face a major shock when police arrives to arrest Kartik for an accident case. Kartik accepts the blame, much to everyone’s shock. Goenkas know that he can never do such a crime. Kartik refuses to get any help from Goenkas. He wants to keep them safe. The mystery intensifies for Goenkas. What has Kartik done? Who is threatening him? Keep reading.

Reviewed Rating for this particular episode Yeh Rishta 27th July Preview Kartik Goenka gets arrested: 5/5 High mystery
This rating is solely based on the opinion of the writer. You may post your take on the show in the comment section below.