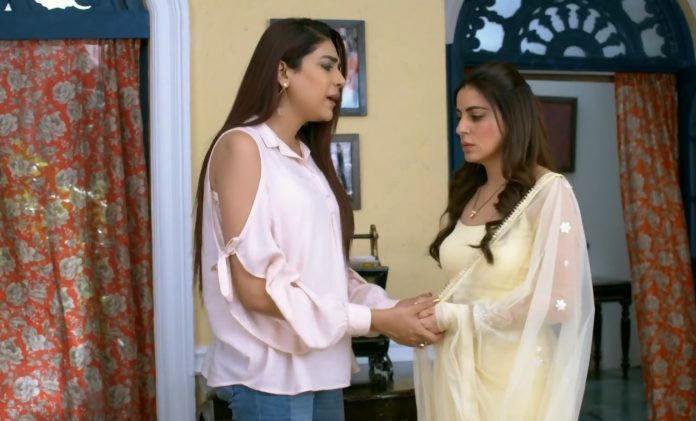 Kundali Bhagya Preview Before TV 29th July 2020 Kareena and Ramona ask Karan the reason for spoiling their happiness and putting Mahira’s life in danger by inviting Preeta. Karan doesn’t think that Preeta will pose any problem. He asks Mahira if she has any problem if he invited Preeta. He tells that he can’t help her in this, he can’t stop thinking about Preeta, he hates her and wants to test her by seeing if she will attend her wedding.

He tells that she did wrong with his dad and brother, he can’t forgive her, he wants to see her in trouble, he wants her to cry seeing his marriage. He tells that Preeta should see his happiness with Mahira. He wants to show Preeta that he isn’t like he appears, he isn’t weak, he is much strong and his family comes first for him. He wants to clear Preeta’s misunderstanding. He tells that he had many girlfriends in the past and now he is marrying Mahira.

She asks why didn’t he ask them before inviting Preeta. Karan tells her that he just wants to keep his enemy in front of them, so that she doesn’t back stab them again. Rishabh gets enough to hear his nonsense. He realizes that Karan is going to hurt Preeta again. Karan wants revenge on Preeta. He tells that Preeta will be insulted after witnessing his marriage. He wants to settle scores. He asks the family not to worry for him. Preeta sheds tears for Karan. She recalls his bitter words. She gets worried when his voice echoes in her ears.

She didn’t wish him to affect her so much. Shrishti finds her crying. She doesn’t want to ask Preeta about her feelings. She tries to trick Preeta and know what she wants. She tells that Mahira and Karan’s marriage is a good thing to see, they will finally get rid of Karan. Preeta agrees with her. Shrishti tells her that they shouldn’t care for Mahesh and Luthras, even if Sherlyn and Mahira are causing much harm to them. She tells Preeta that Mahesh would be so burdened that he can’t expose Sherlyn and Mahira’s face. She is sure that Mahesh would have supported her. Preeta gets emotional when Shrishti reminds her of Mahesh and Rakhi.

She tells that Rakhi loves her a lot and takes a stand for her. Preeta knows that Rakhi is a good person like Rishabh. Shrishti tells that Rishabh is a sensible man, but he fails to support her, he is scared of his evil wife Sherlyn. Preeta asks her not to think wrong about Rishabh. She praises Rishabh. Shrishti speaks ill about other members of Luthra family. Preeta can’t hear anything against them. She tells that they shall not get affected because of them. Shrishti asks her to attend Karan’s marriage if she really doesn’t care for him.

She tells that they shall save Luthras from Sherlyn and Mahira’s evil. Preeta tells that they tried to do this before, but failed, they shouldn’t try it again, its better they leave Luthras on their own. She tells that she will attend Karan’s marriage, she will prove that it doesn’t matter to her, she will also move on, she will not step back like a coward. Shrishti gets hopeful that Preeta’s presence will affect Karan. She hopes that Preeta doesn’t get blamed again. She wants to protect Preeta.

She calls up Sameer and asks him to inform Karan that Preeta is coming in the marriage. Sameer worries that Karan is planning to insult her. He asks her to stop Preeta from coming. She asks why won’t Preeta attend the function. He tells that Karan is doing this in anger and can do anything madly. He tells that Karan wants revenge on Preeta. She tells him that Karan has accused Preeta and now Preeta wants to clear the blames.

Shrishti tells him that she is planning something, but can’t reveal it now. She knows that Preeta matters to Karan, he loves her and she also loves him. She wishes that they unite by leaving their ego. She tells that Karan and Preeta will realize their feelings. She wants him to help her in stopping Karan and Mahira’s message. Sameer promises her. She gets thankful to him. They team up to stop the marriage.

Reviewed Rating for this particular episode Kundali Bhagya Preview Before TV 29th July 2020: 5/5
This rating is solely based on the opinion of the writer. You may post your take on the show in the comment section below.