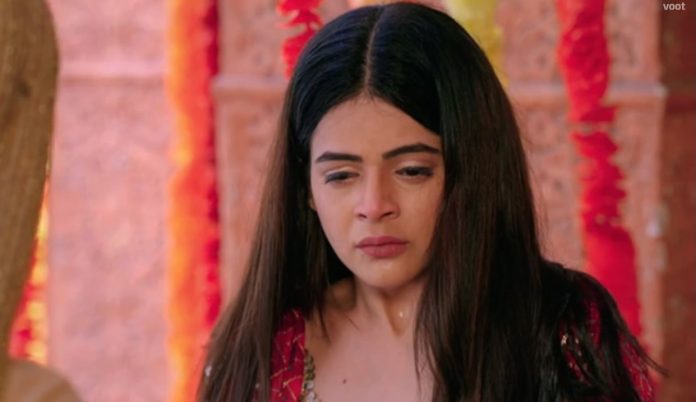 Shakti Today Update 28th July Saaya reveals Soumya’s truth Saaya stops Heer in the nick of time and saves her life. Heer gets to see the kinners again. Virat stays angered on himself. He feels he has made a big mistake. He wants to forget Heer as his life’s big mistake. He decides to make a new start. He cleans his room and throws all the things that remind him of Heer. He tells his family that he wants to get his clothes cleaned. He bonds with the family. His pleasant change surprises everyone.

Parmeet gets happy that her son is back. She asks him if he is fine. Virat tells her that he is totally fine, he isn’t upset. Sant thinks he is really heartbroke and acting to show he is normal. He wants to plan something to help Virat. Saaya asks Heer did she get mad. Heer tells her that they all lied to her. She doesn’t want to forgive them. She tells that Virat forgot his love just because of Soumya’s truth. She feels her life got ruined. She tells that everyone cheated her in her life. Saaya hugs and consoles her.

Sant gifts an expensive car to Virat and asks him to speed up his life. He lets Virat decide for his life from now on. He wants his son to stay happy and live his dreams. Sant is glad that he got his freedom as reward for breaking his marriage with Heer. He tells that one should compromise for making many lives better. Virat thinks to compromise with his life instead having Heer’s memories. He hugs Sant. Saaya asks Heer to know that Virat’s love wasn’t true, else Soumya’s truth would have not affected him.

She wants Heer to know that Virat’s love was fake. She asks Heer to think of her family, who loves her a lot. She doesn’t want Heer to end her life for Virat’s life. She asks Heer to come with her and know Soumya’s truth. Virat reaches the temple. He fails to see Heer getting dragged by Saaya.

Saaya gets Heer to her place to tell Soumya’s truth. She wants to tell Heer about Soumya’s childhood. She reveals how Soumya has tolerated the hatred from her father and grandmum. She tells that Soumya struggled to handle her kinner identity, but she has well fought with her fate. She tells how Soumya has won against all odds and gained a recognition for herself. She tells that Harman used to love Soumya a lot. She wants Heer to reconsider her decision. The kinners praise Soumya for always being positive, helpful and kind.

Saaya tells Heer that she has seen Soumya since her childhood, which wasn’t an easy one. She tells that Harman married Soumya, their life wasn’t easy, Preeto had made her life hell, she troubled Soumya a lot, but Soumya still did a Bahu’s duty and kept all her relations. She doesn’t want Heer to know about Soumya’s hardships. She wants Heer to learn from Soumya’s life. She gets Heer home. Heer doesn’t want to be with her family. Preeto and Harak get glad to see Heer fine. Saaya tells that Soumya loved Singh family a lot.

She tells how Soumya has sacrificed her happiness for Harman’s love. Preeta tells Heer that Virat’s love is fake, Harman’s love for true, his love was ideal, the world remembers his love, he fought with the world for Soumya’s sake. She asks Heer to forget Virat, who doesn’t deserve her love. Heer remembers Virat’s humiliating behavior. What will Heer decide now? Do you like the ongoing track? Shoot comments below.

Reviewed Rating for this particular episode Shakti Today Update 28th July Heer learns the truth: 4/5
This rating is solely based on the opinion of the writer. You may post your take on the show in the comment section below.