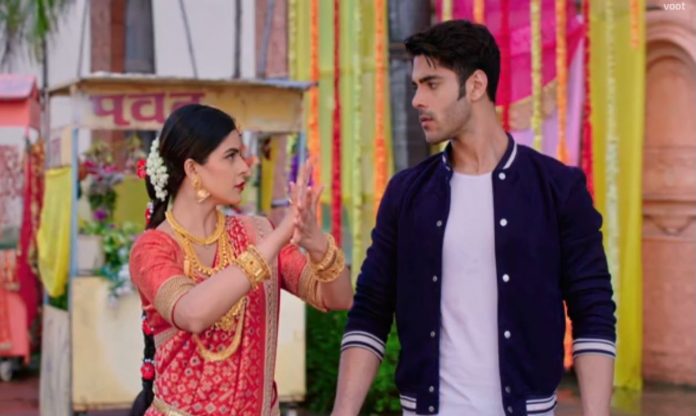 Shakti Latest Colors Preview 29th July Virat condemns Heer Preeto cries and praises Harman’s love for Soumya. She tells Heer that Virat had broken the alliance, its not love that Virat left her for Soumya’s truth. She reveals how Harman gave his life for Soumya’s sake, he died while saving her. Preeto tells her that Virat’s love isn’t true, love should be selfless like Harman and Soumya’s love.

Saaya tells Heer that Virat never loved her, else he would have not left her for anyone. She tells that Virat took revenge on her. Heer’s heart for Soumya changes again. She understands that Soumya wasn’t a bad mother, she shouldn’t hate her. She remembers Soumya’s love for her. She misses Soumya and hugs the toys. Heer apologizes to them. Rohan tells her that she should know what does true love mean after hearing Harman and Soumya’s love story. He asks her if Virat truly loves her, if he does then they can convince him.

She doesn’t want Rohan to get insulted like Soham got insulted. She tells them that they are right, Virat never loved her, he made an excuse of Soumya and broke up with her, since he wanted to get rid of their relationship. Virat wants to end his relation with the Goddess. He asks why didn’t she keep the kinners away from the society. He criticizes kinners. He imagines Heer as a kinner. He hates her look and her truth. Heer tells the family that Virat cheated her, she was foolish to come in his words. She wants to forget Virat.

She understands why the family was against Virat. She tells that she understood Virat’s truth. Virat laughs on himself that he chose a kinner for marriage. Heer promises that she will never doubt on the elders’ decision and never hurt their heart from now. She changes her heart and gets positive. She wants to respect the family, who loves her a lot. Virat doesn’t want anyone to laugh at him for choosing a kinner. He closes Heer’s chapter in his life. Heer tells that she will choose a new life, she will never meet Virat, she will only live for them. Preeto and Harak get glad to hear this.

They bless Heer. Preeto tells her that they will always protect her. Virat thinks of the time he had married Heer in the temple. He thinks of the consequences that Heer’s kinner identity would have ruined him. Virat can’t let it happen. He feels Heer’s family lied to her that she doesn’t know she is a kinner. He catches a kinner and imagines Heer in her. He scolds the kinner. He gets to see someone else.

Parmeet makes food for her son. She taunts Gurinder for being childless. She wants Gurinder to plan her family. She tells that she wants her grandchild. She tells that she will get Daljeet remarried. Gurinder gets hurt. Heer and family find Soham ruining Soumya’s memories from the house. Soham tells Heer that he will throw out everything, since she lost her happiness and love due to Soumya. Heer stops him. She tells that Virat has ruined everything since he never loved her, he would have not dumped her due to Soumya’s truth. She doesn’t think Soumya should get blamed. She doesn’t want Soumya to get away from her.

Soham tells that Soumya is a kinner, she has no place in their lives. Soham tells that there is no truth bigger than Soumya’s identity, she is a stain on their family. He speaks ill about Soumya. Shanno thinks Soham will soon know Heer’s kinner identity and shoot her down, he will hate Heer as well. Heer wishes that she never gets against Soham. She tells that he can’t hurt any kinner. She feels she did wrong to choose Virat against the family. She takes Soumya’s pictures from him. Soham stays angered.

Preeto doesn’t know what would happen when Soham learns Heer’s truth. Shanno tries to weaken Heer. She tells her that she had seen Virat’s true love in his eyes, she can’t believe that he left her. She makes Heer miss Virat. She asks Heer not to give up and try to win Virat’s love. She asks Heer to meet Virat once. Heer asks her why is she giving this advice. Shanno asks her to think of her future. Shanno wants to anger Virat so that he blurts out Heer’s kinner identity truth.

Reviewed Rating for this particular episode Shakti Latest Colors Preview 29th July Virat hates Heer: 3/5
This rating is solely based on the opinion of the writer. You may post your take on the show in the comment section below.