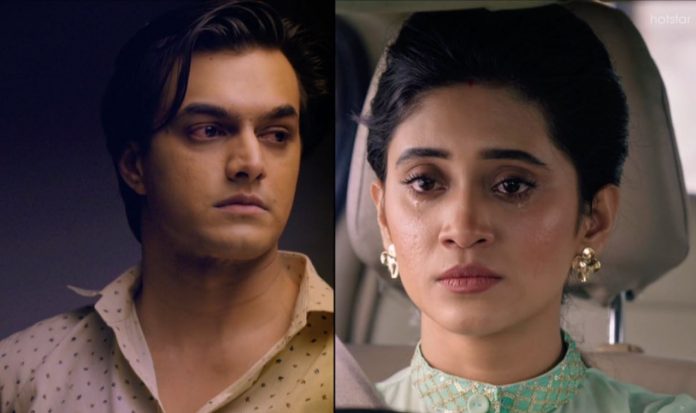 YRKKH Latest Naira proves Kartik innocent 29th July Naira wants to find out the reason for Kartik’s strange behavior. She gets disturbed thinking the reason is so concrete that he isn’t able to share it. She wonders what is it. She tries to find out evidences to support Kartik. She reaches the accident site and tries to gain clues from the nearby installed cctv cameras. She finds Goenkas’ car parked around the same area in the cctv footage. She thinks if not Kartik, then who had driven the other car and why.

She calls up home and questions Surekha about it. Surekha behaves weird and hides something. Naira suspects her. She rushes home to answer the elders about her findings. The elders want to know what did Kartik tell Naira and what is holding him back. Naira wants to question Surekha first. She shares her doubt with Suwarna. Suwarna blasts at her for doubting Surekha. She tells that Surekha can never make such a big mistake. She doesn’t want Naira to question Surekha and break her heart. She tells that Surekha can never do wrong with Kartik.

She defends Surekha. Still, Naira thinks to ask Surekha once. She finds Surekha with the parking lot slip. She goes to confront Surekha about the accident. Surekha doesn’t want to meet anyone or answer any question. Naira tries hard to meet her and get her answers. Akhilesh fumingly reaches them and wants answers from Surekha.

He tells Naira that Surekha has hidden a big thing from them. Naira follows him to know the matter. Akhilesh confronts Surekha for being good towards Lav and Kush, when they have been so wrong. He doesn’t want her to send money or goods to their sons. Surekha tells him that she is a helpless mother, she loves her sons and would do anything that’s possible. Naira learns that they are fighting because of Lav and Kush. She wants to find the real culprit behind the accident. She realizes that Surekha had gone there to send some goods to her sons. She feels sorry. She feels her mind isn’t working due to stress about Kartik.

Meanwhile, Kartik waits for his confession recording. He wants to get rid of the problems his way by keeping his family safe. He thinks once his confession gets recorded and signed, then there won’t be any looking back, Naira also can’t save him then. He wants Goenkas to look after the business. He tells the inspector to hurry up with the process. Inspector asks him why isn’t he struggling to save himself when he can easily do that with his money and influence. He asks Kartik why did he give up so soon without any defensive move.

Kartik tells him that he has chosen to lose so that he wins for the family. He doesn’t clearly mention what he has done, what sacrifice he made for his family. He cries for his wife and family. He misses Naira dearly. Dadi and Naira plan to send homemade food for Kartik. Dadi tells Naira that she will not ask anything to Kartik and just be with him. She wants to see him once. Naira sends Dadi to Kartik and also a note hidden in the kachori. Dadi meets Kartik and tells him that he didn’t need to get away from them. Naira’s note reaches him. He doesn’t want to read it. Dadi insists him to check it once.

She believes that he would be fine and come out clean once the blames get removed. She shows her faith. On reading the note, Kartik learns that Naira is finding clues to save him. He doesn’t want Naira to reach the truth. Naira doesn’t want the case to reach the court. She wants evidences to prove Kartik’s innocence. She thinks she is missing out something that’s in front of her eyes and still she is ignorant. She prays to get able to see the hidden way. She gets to overhear Manish and Akhilesh’s conversation.

She gets hint from their talk, when Manish mentions that they have got money in exchange of Kartik. Manish finds it strange that Sita wasn’t signing the deal before, but then she signed the deal and transferred the money in one day, she is speeding up the launch and helping them a lot. He tells that everything could be perfect if Kartik was with them, but once they got the money, they lost Kartik. Naira suspects Sita after hearing this.

Reviewed Rating for this particular episode YRKKH Latest Naira proves Kartik innocent 29th July: 4/5
This rating is solely based on the opinion of the writer. You may post your take on the show in the comment section below.