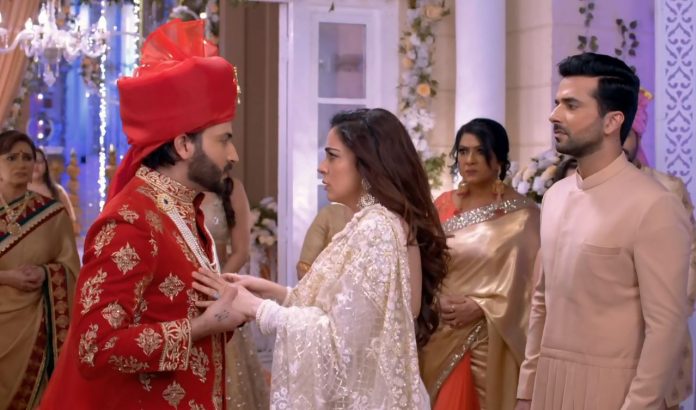 Kundali Bhagya Karan shocking rage at Preeta 31st July Sherlyn informs Mahira that Karan turned stone-hearted, he has fought with Rishabh since he is desperate to marry her. She praises Mahira for casting such a spell on Karan. Mahira gets excited to marry Karan. She thanks Sherlyn for bringing the good news. Sherlyn tells her that if Preeta comes in the wedding, then Karan will definitely look after her. She wants Preeta to stay away.

Mahira asks her to let Preeta come. Sherlyn tells her that Preeta is coming in the marriage. Mahira knows that Karan hates Preeta, he will insult her, she wants to see it. Sherlyn reminds that Karan and Preeta were in love before. Mahira doesn’t think they are still in love. She is glad that Preeta will know Karan’s hatred today. She wants Preeta to see her marrying Karan. She thinks it will be fun to watch Preeta crying. She awaits Preeta.

Rishabh is worried because of Karan’s behavior. Rakhi asks him if he explained Karan to give a chance to his marriage with Preeta. Rishabh tells her that Karan didn’t agree, he didn’t understand anything, he got mad in anger. He feels Karan got much changed. Rakhi feels that Karan loves Rishabh the most. She tells that Karan would never listen to her, so she has sent him to talk to Karan. Rishabh tells that he isn’t listening to anything, like he got blinded by suspicion.

He feels that Karan is upset with himself, he reacted angrily and the matter got worse. He thinks Karan is doing wrong to insult Preeta, he invited her in his wedding, Karan is totally deserving her hatred. He tells that if Preeta insults Karan, then it will be justified. Rakhi is sure that Preeta can never hate or insult Karan. She shows her faith on Preeta. The family rushes and dances in the baraat. Rishabh isn’t happy for Karan’s blunder. Karan meets the family. They bless the groom and make him dance. Karan waits for Preeta.

She arrives to prove to him that he means nothing to her. Karan wants her to enter the house and see her real place. He welcomes her. She doesn’t feel like coming inside. Karan and Preeta get tears in their eyes. Karan takes Preeta for a dance in his baraat. Rishabh feels sorry for Preeta. Karan gets unexpected. He wants to hurt Preeta. Rishabh intervenes to stop Karan. Karan doesn’t want Rishabh to support her. He continues his madness. Rishabh asks him to stop it now. Shrishti takes Preeta with her. Karan asks Mahira to welcome him. He asks Rakhi to stay with him. Shrishti asks Preeta how could she tolerate it.

Preeta tells that Karan was just dancing, he is really an angry soul, he was looking angry because of his nature. She tells that Karan is kiddish and always rebels when things don’t go according to him. She asks Shrishti to ignore Karan. She tells that they will just attend the marriage and leave, they will never return to Luthras, they will forget the day’s bad happenings as well. Shrishti tells Preeta that Karan got spoilt because of her pampering. She feels sorry that Karan was manhandling her. Preeta asks her to attend the functions. They attend Karan’s welcome ceremony. Karan wants to see Preeta getting affected.

He acts to be very happy. The family blesses Karan. Rishabh gets upset with him. Karan tells Preeta that he will just marry Mahira. He asks Ramona to call Mahira to the mandap. Preeta shows her happiness to him, which makes him puzzled. Karan sits in the mandap and awaits Mahira. Kareena takes Preeta with her to lecture her. Sherlyn is sure that Kareena will not spare Preeta. She gets happy seeing Preeta ill-treated.

Reviewed Rating for this particular episode Kundali Bhagya Karan shocking rage at Preeta 31st July: 4/5
This rating is solely based on the opinion of the writer. You may post your take on the show in the comment section below. 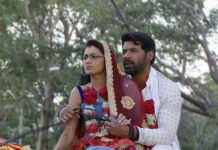