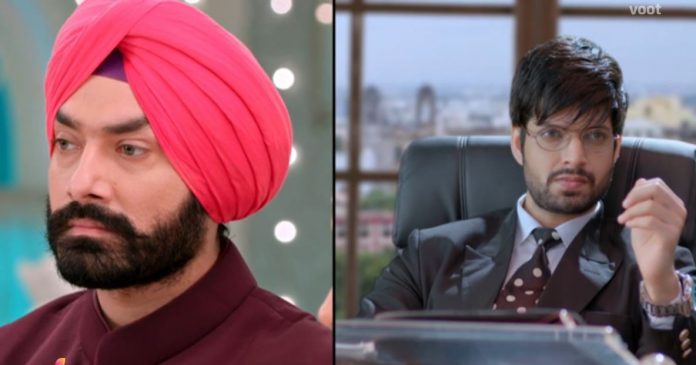 Choti Sardarni Vikram Sarabjeet clash 4th August 2020 Meher questions Sarabjeet about Vikram Diwan. He doesn’t want to tell her anything to keep her away from worries. Vikram reaches Amritsar to investigate the case further. The media questions him about the scam case. Vikram doesn’t answer them and leaves. Harleen is worried that people are protesting against Sarabjeet. He tells her that he isn’t worried, he will try to manage everything.

Aditi gets emotional when Sarabjeet tells her that he is like her brother, she is also his family from now. She can’t forget the past. Meher finds Aditi getting an asthma attack. She calls Sarabjeet to get help for Aditi. Aditi gets breathless. Sarabjeet and family look for the inhaler. They don’t find it anywhere. They just wish to get the inhaler in time. Meher and Sarabjeet worry for Aditi. The baby cries and needs Meher’s attention.

Sarabjeet sends Meher to the baby. Meher goes to take the baby. She gets Aditi’s inhaler in Param’s toy factory. She gets the inhaler in time and saves Aditi’s life. Aditi gets normal in some time. She realizes the worth of family when she finds Sarabjeet taking care of her like an elder brother. Aditi tells him that she is fine. Aditi gets a change of heart. Sarabjeet learns that Param was playing with the inhaler. Param asks them to return the inhaler thinking its a toy for them.

Meher tells Sarabjeet that its good the baby cried and she went to the room, where she found the inhaler. She stops Sarabjeet from scolding Param. Kulwant thinks none can punish her for her sins. Vikram returns to punish the evil people. He doesn’t want to spare anyone who did wrong with him. He is determined to not forgive the wrong doers. Kulwant feels proud that none could know her truth. She gets overconfident. Vikram wants to teach a lesson to the wrong people. Harleen and Meher explain Param that he made a mistake. He apologizes to Aditi. Aditi showers love on him. Param asks Aditi about her childhood.

Aditi tells him that his childhood is much secured, he is lucky, her childhood wasn’t good. She feels sorry for Param. She recalls her bad childhood and gets back to her revenge motives. She asks Lalita to execute her plan. She feels everything is fair in love and war. Sarabjeet sends his manager to meet Vikram. Manager tells that Sarabjeet is busy in an important meet. He recalls meeting Manav. Vikram tells that he appears in every criminal’s nightmare. He gets rude towards him. Manager tells him that Sarabjeet is innocent, there can’t be any proof against him.

Vikram discards the documents. He scolds the manager for defending Sarabjeet in the scam case. Vikram blames him for trying to bribe him on duty. He gets the manager arrested. He poses wrong charges on him and shows his power. The manager realizes that Vikram is really wrong. He threatens Vikram about Sarabjeet’s power. Sarabjeet tells Harleen that his manager got arrested. He assures that he will get his manager freed in an hour. Vikram awaits the beginning of the game.

Reviewed Rating for this particular episode Choti Sardarni Vikram Sarabjeet clash 4th August 2020: 5/5
This rating is solely based on the opinion of the writer. You may post your take on the show in the comment section below.