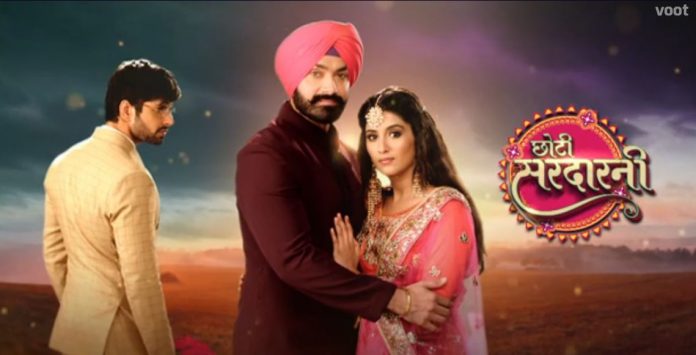 Choti Sardarni Meher strange outburst 5th August Meher tells Sarabjeet that Param is having a good time with the baby. Sarabjeet gets glad. He asks Harleen to think of some good name for the baby. The family comes up with good suggestions for the baby. They ask Param to think of a good name. Harleen tells that she will try to suggest a good name. Meher recalls Manav’s words. Manav wanted to name his son Karan. Aditi suggests Karan. Param thanks Aditi for suggesting the nice name. Sarabjeet and Harleen also like the name Karan.

He finds her crying. He asks her the reason for her tears. He doesn’t want her to get upset when its a big day for their baby. He cheers up Meher. Aditi asks Harleen if everything is fine. Harleen tells that Meher acts strange some times. Aditi shows the news update. Harleen doesn’t want her brother to get defamed. She clears Sarabjeet’s name. She doesn’t want Sarabjeet to get stressed.

She asks Aditi not to tell anything to Meher, else Sarabjeet will be troubled. She tells that she loves her brother a lot, she can do anything for his well-being. Meher makes up her mind. She doesn’t want to think of Manav. She wants to move on with Sarabjeet and start a new life. She wishes that the past doesn’t affect her present. She thinks if she still loves Manav. She knows that Sarabjeet loves the baby a lot, knowing that its Manav’s baby. She wants to change for Sarabjeet’s sake. Meher agrees to Sarabjeet and names the baby Karan. Sarabjeet wants her to be happy always.

Kulwant and family learn the name’s choice and congratulate Singh family. Meanwhile, Vikram interrogates Sarabjeet’s manager. He wants him to admit Sarabjeet’s involvement in the scam. He asks him to give Sarabjeet’s bank details. Vikram gets the orders from seniors. The manager expects his release after the call. Vikram asks him to remember the questions to ask Sarabjeet. Vikram gets to speak to Sarabjeet. He tells that the manager didn’t say any word. Sarabjeet welcomes Vikram in his city.

Vikram tells him that he wants to welcome him and waiting for the right time. Vikram tells that he has released his manager, but he will do anything to find the truth. Sarabjeet tells that he is ready to cooperate in the enquiry. He isn’t scared since he isn’t wrong. Vikram is confident to defeat Sarabjeet. Sarabjeet takes his challenge.

Reviewed Rating for this particular episode Choti Sardarni Meher strange outburst 5th August: 3/5
This rating is solely based on the opinion of the writer. You may post your take on the show in the comment section below.